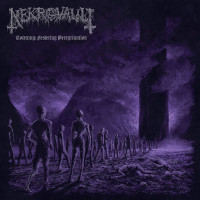 There has been huge diversification in death metal over the years since ol’ Chuck Schuldiner left us. When you look at the death metal landscape now, you’ve got trad death, melodic death, tech death, brutal death, slam and more besides. Where some of these sub-genres wilfully eschew the more foreboding, sinister or horror-infused aspect of death metal’s base DNA, others are keen to lean into it. Personally, I have something of a soft spot for death metal that manages to transport the listener to somewhere grotesque and frightening. It’s not something that’s easy to do however, so you don’t see that many bands achieve it successfully.

Along come Bavarian death-dealers Nekrovault (which is a superb death metal band name, let’s face it) with their debut record Totenzug: Festering Peregrination. I confess I had to look up what Peregrination meant, but it ties in perfectly with the artwork, which in itself leaves you in no question as to what sort of record you’re in for. What is less clear is whether or not the band will be any good at doing that particular thing. As it turns out, Nekrovault are very fucking good at it. From the opening track which begins with the sounds of manacles and shuffling feet, you’re immediately within the deeply grim and unsettling world Nekrovault have summoned into being. After squalls of feedback, when the band finally arrive in earnest around the 90-second mark, it’s disgustingly glorious. Booming, claustrophobic low-end from the rhythm section, scrabbling tremolo-picked leads and blackened vocals drift across the low-tempo beat like an oppressive and impenetrable mist. Later in the track, the double-kick drums arrive and the band start to stretch their legs, giving an indication of what might be to come. It’s an absurdly strong start for the first track on a debut album, there’s no denying that.

Across the album’s other 6 tracks, there are myriad moments that I could point to with the aim of highlighting the quality of musicianship and songwriting, but ultimately the record stands so well as a single unit, that it seems like it would somehow undermine that fact were I to try to pick out individual parts. But then I have to at least try to evoke the feeling of listening to these songs, so I’ll do my best. Helping the record build on its sense of personality and narrative, there are the sounds of flies at the end of “Serpentrance” that immediately bring to mind the putrefaction that they’re unquestionably supposed to, the album closes with a similar sound of shuffling, shackled feet as it opened with, which makes it all feel perfectly self-contained, and there is even an semi-triumphant ‘final act’ feeling to album closer “Eremitorium” with the song shifting gears around the 3-minute mark to something approaching a trad-metal style (something which the Bavarians know a thing or two about, generally) complete with a minute-long solo. There are also periods of doom-laden groove, deathy-trad arpeggios and somewhat unusually, even intelligible lyrics. Throughout, the band rarely settle into a pocket for more than 8 bars, yet it still feels composed and sure-footed, even when the pace picks up and the band are at full pace

I don’t want to keep coming back to the artwork, but the slimey, dystopian underworld depicted is echoed so immaculately in the record (including an immaculate production job) that it feels like watching a movie; and when you really commit to it and let the ambience and cinematic flourishes of the record wash over you, you can easily imagine the alien/humanoid beings, Teutonically trudging their way across the barren landscape. The last time I felt this transported by a death metal record was Blood Incantation’s astonishing Hidden Histories of the Human Race towards the end of last year. I’m not saying this is quite at that level but bearing in mind this is a debut record and Blood Incantation are something of a phenomenon, even comparing them hopefully speaks to the quality of this record. Nekrovault have launched themselves from almost a standing start to one of the death metal world’s most exciting new prospects. The record delivers in all areas that I could ask of a death metal band; power, dexterity, aggression, nuance, atmosphere. An artistic achievement of genuine note.