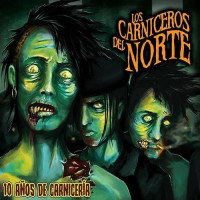 From the depths of spanish post-punk emerges the band Los Carniceros del Norte (The North Butchers) whose songs musicalize horror film themes. As in a Hammer thematic party ,and also raised from the 80's counterculture with a clear heritage of gothic punk, the music is quite dark , including vast register of deep voices, spooky murmurs and echoed shouts.The antology , 10 años de Carnicería, gathers twenty two of their main hits in which it is easy to recognize iconic horror movie idiosincrasies in a slightly fun, highbrowed way. Not only in the titles of the songs, which share most of the times the homonymous with a classic horror film, but in elements of the lyrics, that mention specific characters of reference or place the narrator in the film scenario. The riffs and rhythms are constant and sometimes repetitive but rather than creating a boring scheme it sets an envolving atmosphere, at least is the effect with which hits songs as 'Veneno para las Hadas' or 'El Ansia'. The lyrics upraise necromancy or recall how's it like to be inside the Cabinet of Dr. Caligari all inmersed in a wave of gothic rock and punk attitude.


In fact , some faster songs as 'Garras Humanas' have a garage-punk vibe not only in the nature of the dirty guitars and yelling voices but in the structure of the song.

To sum up, this recopilatory is a closure of the band's first ten years on the scene but also works as a perfect cover letter if it's an unknown band for the listener.