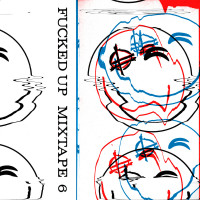 One of the main points of a mixtape is that it doesn’t need to be cohesive. Yet, on Mixtape 6, Fucked Up’s companion to the stellar Dose Your Dreams, the band uses the form as a linear supplement for the main work itself. The strategy works well.

Throughout Mixtape 6, FU’s main orchestrator Mike Haliechuk weaves in a series of interviews, taken mostly from vocalist Damian Abraham’s Turned Out a Punk podcast and Vish Kkanna’s Kreative Control. For the most part, the interviews look at how the band Fucked Up came to be, or, Haliechuk’s grand vision for Dose Your Dreams. The intrviews work to highlight the importance of the individual tracks. Moreso, Fucked, meta-referential as ever, uses the interviews to detail the layer on top of Dose your Dreams. Yes, it’s about a psychic mind warp time travel, but it’s also a direct reflection of who has the reigns in the band- a topic that probably should get old, but for this particular band, never seems to. The band spends a good amount of time detailing the fact that almost everything in Fucked Up is a reference to classic punk hallmarks, so perhaps the Mike/Damian dynamic is also a reflection of the most famed of all conflict- Johnny/Joey… or maybe that’s peering too deeply, but with Fucked Up, that’s kind of the fun.

And Haliechuck, perhaps somewhat uncharacteristically, seems to be having a lot of fun here. The mixtape is haul for hardcore collectors and dollar saver- rare covers from expensive compilations and rare sides from obscure Fucked Up singles are rounded up ere. The band’s Grateful Dead cover is here as well as the A-side ultra rare single “Fading Eyes” (which I’m not even sure actually exists- is this a throwback to the early mystery-laden days of Fucked Up?)

Haliechuck has mastered mixing as well. The earliest Fucked Up mixtapes seemed to seethe from ether, with tracks layered in top of each other as a purposefully difficult sound clash, ala Crass’ mid-period audio collages. But here, the tracks rip from tune to tune, with some of the weirder parts mixed in between. We also get some unreleased radio sessions (including a Ramones cover!) and copious notes on the tracks. On top of that, we get a taste of the band’s next zodiac entry, which is very promising.

Fucked Up mixtapes are often cryptic and shrouded in dead ends and secret passages. But here, Haliechuk uses the form to further detail the lofty goals of current-Fucked Up with a great deal of clarity. Not only is the band hitting these high marks, but they are doing it with a series of cracking tunes as well. Somehow they’ve made 80 minutes of expansive music feel like a concise explanation. It’s actually an academic lecture on the band but it moves with the speed and excitement of the tape that your cool cousin just gave you because, just maybe, he sees promise in you.