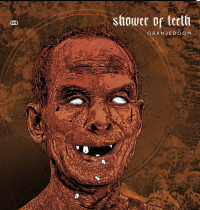 This is going to be a quick one. Promise. A friend of mine pointed me in the direction of this record (released as an album but is all of 7 tracks and 19 mins long) because it’s fast, angry and kind of scrappy. I can see why he thought I’d like it to be fair.

If I was going to be generous, then I’d say there are moments of a cross between the wildest parts of Cancer Bats and Every Time I Die. If I was going to be less generous, then I’d say it was more like a band that had been listening to The Chariot, HECK and Converge, and not necessarily yet having the experience to mimic the composure and craft innate in those bands, they have replaced it with swivel-eyed lunacy and the sense that the songs have been written by a toddler who had been left alone with their mum’s morning gallon of cold brew. Perversely, it’s exactly this ADHD, hyper-enthusiasm that is the record’s biggest allure. Song titles like “’Til Death Us Do Party” and “Vagabondage” give you an idea of what we’re dealing with here. It’s beer-crushing, wiry, rock-and-roll, party hardcore. The brevity of it is also a smart move in my mind. Not because it’s unpleasant to listen to, but because it’s almost raising a flag to say ‘This isn’t the finished article but listen to what we got’ which I’m very happy to do.

One thing I do struggle with a bit is the production, however. It’s very trebly, the cymbals bleed too much and although this sort of thing wouldn’t work if it was too polished, it definitely has the feeling of being done either cheaply or in a rush. Neither of which are things that I can entirely criticise the band for. It’s not like new, young bands are replete with production budgets or major label advances like they once were. And if I were again going to lean to the more optimistic side, maybe the sense of being captured semi-live in the studio is a deliberate choice. It’s certainly noticeable and in-keeping with the content, whether you like it or not.

When we’re all stuck indoors and live music is a combination of a long way in the future and little more than a cherished memory looking back, this record does provoke in me a feeling of being alive and urged to throw myself around the room and spinkick the shit out of my cat, which is no bad thing. Apart from for the cat, obviously. Going to be keeping an eye on these guys.