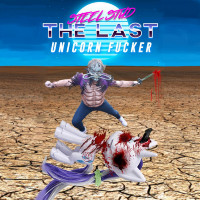 Well, this is concerning. Big Moose Manholington is getting worse. He’s also getting better, but that also is making him worse. That is to say, the focal point of Big Moose’s music is that he’s a brony. (FYI- a "brony" is a grown man that likes My Little Ponies). But not only is he a brony, but he’s what they call a “clopper.” If you don’t know what a clopper is, consider yourself lucky. However, that luck is about to end. A clopper is a dude that whacks off to My Little Pony Cartoons. In fact, Big Moose is such a fervent clopper that he has dedicated entire albums (plural!) to the topic of why cartoon horses make him horny. His magnum opus seemed to be Clop til you Drop which, astoundingly, was an entire album of poorly recorded, amateurish Ramones-influenced tracks about beating off to Saturday morning cartoons. We all hoped he got this very weird fetish out of his system.

From what I can tell, The Last Unicorn Fucker sets Big Moose (as Steel Stud) into the future. There, he seems to be waging a war on behalf of Brony-dom. I’m not exactly sure what he’s attacking, but from what I can tell, he doesn’t like another franchise that is gaining steam in the cartoon-whacking community and he now finds himself the last of people unhealthily infatuated with My Little Ponies while his pals have moved onto other animated series. You’d think that this is not the kind of thing that you’d want to broadcast… but, well, I guess while most internet creeps hide behind usernames and lurk around 4chan, Steel Stud is putting his bizarre cravings right out into the public. The man has no shame, that’s for sure.

What is troubling about this release is that Steel Stud/Big Moose is achieving a certain level of competence. His earlier releases appeared to just be Big Moose rambling over youtube clips with vague Ramones-references dropped here and there. Unless he has found better quality material to steal, for the first time, here, his musicianship is passable. Get rid of all the songs about beating it and the magic references, and you’d have a passable Ramones-core release. It’s actually pretty impressive how, despite being clearly off his rocker, he’s able to re-create the Sonics of the Ramones almost as well as most run-of-the-mill Ramonescore bands.

But, Steel Stud isn’t any run-of-the-mill Ramonescore band. It’s a Ramonescore band where every single song is either about jerking it to horses or about why he’s mad other people aren’t jerking it to the same horses he is jerking it to. “I used to be the belle of the Bronycon, now I’m the only one, I’m my main pony” he laments on “Mane Pony.” He seems genuine.

And that’s where the question rises. Before, Big Moose was just some weirdo who may be running a joke into the ground ten times over or maybe he was really disturbed. There’s lots of disturbed people out there. Whatevs. But now, he has spent considerable time and effort to write, craft, and record a full albums worth of snappy Ramones-ish tracks... which he then, doubled down, and spent a fair amount of time to write ten songs (plus an intro and an outro) about whacking it to My Little Ponies. One would think that as his songwriting craft improved, Big Moose would want to take the subject of his art more seriously. It makes one queasy that The Last Uniform Fucker proves that there’s nothing more serious to him than "clopping." Some people reach out for help in times of trouble and others just turn tail and flee, eagerly galloping into darker pastures. Steel Stud has made his choice clear.