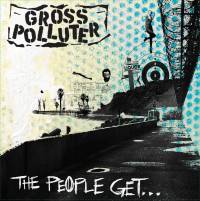 Just a handful of weeks ago, I was ranting and raving about how good the 20th anniversary reissue of the debut Smogtown album, Führers of the New Wave, was. After Smogtown split up a few years back, most of the members went on to form Gross Polluter. I must say, the stuff Gross Polluter is doing is a little different, but might be on par with their former incarnation. It’s punk made by grownups, for grownups, that still manages to have more of an edge than what most of the kids are doing. The People Get...What the People Get is punk that takes the piss out of most modern “punk”.

The backwards masking at the beginning of side A opener “Suburban Weekend Lockdown” is almost certainly a reference to the great “Satanic” ‘80s SoCal punk albums. It’s lyrics also give us the record’s title, but its message is much more modern. That message being that technology has largely replaced genuine human interaction. “Just Here for the Violence” is another track that harkens back to the nihilistic roots of punk, before its politics grew so mainstream. “I don’t care about the kids/Or ending nuclear war/I’m not here to sing a protest song/I’m just here for the violence.” The first half ends with some swirling organ on the brilliant “Mastvr”. It’s a scathing critique of the packaging and selling of punk culture.

“Sleepless City”, the catchiest song on the record, kicks off side B. It’s a sad sing along tale about the ravages of addiction, but has a riff that would make Johnny Ramone proud. “Cynical Scumbaggery” and album closer “Breakwater Blues” take a long, hard (and cynical) look at what passes for progress these days. Gross Polluter have a real talent for sniffing out and distilling in words the ugliest parts of modern life, and they do it without coming across as unnecessarily preachy. Is there a better way to confront 2020 than with a menacing sneer?

The People Get...What the People Get is 10 songs in a tight 27 minutes, but still manages to provide a nice sonic diversity. There is a good variety of speeds and textures, but it’s always straight up punk, without the common creeping metal influences. The shouted lead vocals are contrasted by the melodic backing vocals. The crunchy rhythm guitar is complemented by the soaring lead guitar. For the second time in 2020, I’m torn between 8/10 and 9/10. (I never give a new release a 10!) Although I’ve opted for the more conservative score, I’m sure that when December rolls around, this will be on my personal short list for album of the year. Gross Polluter need to be on your radar.