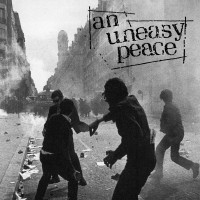 An Uneasy Peace was a band featuring the late Lance Hahn of J Church notoriety. Lance passed away in 2007 following a prolonged battle with kidney disease. The self-titled debut EP, which was finally released earlier this month is a short and pointed 4-song EP of charged anarcho-punk influenced hardcore. The songs are fast, catchy, and memorable. On first listen, and prior to doing some band related research, the production quality wore on me. After repeated listens, and given the recording timeline and understandable delay, the songs and sonic quality of the recording grew on me. There is a nostalgic feel beyond the story that accompanies the release, which can be difficult to find these days.

The music is traditional, fast paced punk-rock with few frills or surprises. The lyrics are gruff, blunt and primarily shouted, however do build up to welcomed melodic choruses. The stripped-down quality of the record adds to the appeal, at least for me. For fans of Lance Hahn’s previous work – this will likely be a no brainer.

The album information reports that the initially proposed project name was “Unfuckable Chainsaw”. With repeated listens of the EP, I can see how this moniker might have worked. The music is raw and unapologetic and feels like a bit of a relic when compared with the contemporary punk scene. An Uneasy Peace is Definitely worth a listen for both the seasoned fan and newcomer alike.