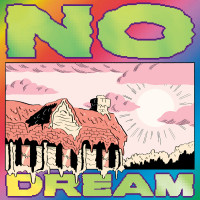 When the world feels like it’s falling apart, there are few things that can lift your spirits like a band or musician you dig putting out a new album. Last week, Jeff Rosentock did just that by surprising us all with No Dream. And while I hesitate to say that this is the perfect time for a new Jeff Rosenstock album, his songs filled with outrage, guarded hope and optimism, self-examination, and an underlying fear that it might all fall apart capture my overall mood of late quite well.

As always, Rosenstock brings some of the most well composed pop punk you’re likely to hear this year. It doesn’t hurt that he’s always surrounded himself with some of the best musicians around, to help shape his songs and bring them to life. The drums on this album, played by Kevin Higuchi, really stood out to me. Not just his ability to play fast when the guitars go into overdrive and the songs speed up, but his ability to sit back and support the songs with more restrained playing when the songs call for it.

Kicking off with the high tempo “NO TIME” a song that finds Rosenstock lamenting lacking the time to have done certain things you’d hoped to. But also, celebrating staying so busy you didn’t become some the things you’ve always feared. Which brings up the genius of so many of his songs, they deal with duality of life. The realization that many of the things that make you a person people enjoy having around, can also make you feel like you’re a piece of shit in certain situations as well. Aside from being a phenomenal songwriter, I think that’s what makes these songs so easy to listen to again and again. Even though Rosenstock has gained more critical acclaim than he had back when he was in Arrogant Sons of Bitches or Bomb the Music Industry! and has played sold out shows at the Bowery Ballroom, you never get the impression he sees himself as the guy on stage singing the songs. You always feel like he could, just as easily, be the guy standing next to you with his arm around you singing along. That’s a kind of authenticity that some musicians never have, and those that do are often unable to maintain.

“Scram!” is the first of four songs that feature Laura Stevenson as a vocalist, and it works so well. While her voice is perfect for slower more intimate music, it still has the power to fit perfectly into punk rock as well. This song, serves as a perfect middle finger to adults who expect people to act, well like adults. And not in the same way Violent Femmes did on “Kiss Off”, but in a way that takes aim at our peers, rather than our parents. Complacency is never a good thing, whether you’re fifteen or in your mid-thirties. The song does a great job of reminding us that we don’t need to listen to people who would rather we be more concerned about our 401k than the world around us; and that just because we don’t share their values doesn’t mean we’re not worthy of a place in society.

The next track, “No Dream”, is one of many on this album that delve directly into the socio-political realm. While this has never been something Rosentock shied away from in his music, it feels like there are more teeth to it here. Maybe it’s because it’s an election year. Maybe it’s because there’s less pulling my head out of my phone, and away from the news cycle. But, when I heard the lyrics, “Fuck all the fakers acting like they’re interested in hearing us when we yell, ‘Hold accountable the architects of hopelessness and never ending violence!’” I immediately identified with it. That being said, a few lines later when he asks, “What can we do?” I identified with it more.

Planted in the middle of the album, is “The Beauty of Breathing” a song about depression, self-doubt, and how struggling with both can sometimes make you wonder if it’s worth it. The title of the song lets you know where Rosentock lands, or at least hopes to, when he encounters these struggles in his own life. The song gains more meaning, when one looks at the liner notes to discover this album holds the dedication “For Britt”. For those of you who don’t know, the Britt in question is Brittany Strummer. Who was an active member of Punknews for years, more importantly she was an amazing human being who made everyone she came in contact with see there is beauty in breathing. At the risk of interrupting the flow of this review, if you or someone you know is struggling with depression or another mental health issue please seek help either from someone close to you or by contacting 1-800-273-8255 or utilizing the chat feature on their website.

Later on the song “Old Crap” we find a really soft opening, harkening back to some of the more acoustic/indie rock influenced material on earlier Jeff Rosentock albums. The song slowly builds, before kicking in and grabbing your attention. This technique isn’t something out of the ordinary in contemporary music, regardless of genre, but when it works … it’s one of my favorite things to hear in a song. It works here, and it works well.

Towards the end of the album, comes “Honeymoon Ashtray” and while my assumption is the song was written well before Covid-19 began playing a role in our day-to-day lives, when I heard the lyric,” You could give me an ultimatum with a loaded gun, I still can’t tell you what day of the week we’re on.” It was instantly relatable and instantly a bummer. But, song relatable lyrics that are bummers are fairly cathartic right now. They help us get through our own experiences, which if there’s one sign that someone is succeeding as an artist. It’s when they write something, that people can relate to and find some form of solace in.

This is a great album start to finish, there isn’t any filler and one song flows into the next one perfectly. That being said, when your discography is as solid as Jeff Rosentock’s … sometimes it’s the little things that make one album better than another. Sometimes it’s the person who wrote the review and their personal taste. His 2016 album, Worry, hit me in all the right places and remains my favorite by him. I think this one just edges out Post- for number two though. The songs, the band, the supporting appearances from Chris Farren, Lauren Brief, the previously mentioned Laura Stevenson all come together to make this an album that is going to see a lot of plays this summer. And this summer is going to need all the good music it can get.

Bleed From Within: Fracture