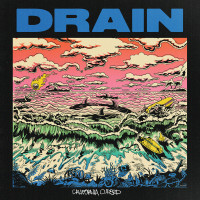 Hardcore is best when it hits you so hard and fast, you don’t even know what just knocked you on your ass. It’s in this knowledge that the 20 minute set of an opener is just as important on a live bill as the headliners and why opening bands have so much to gain by word of mouth. Crucial live moments are just as important as what’s recorded. California’s DRAIN is one of those bands picking up accolades from opening sets for some of the scene’s heaviest hitting up and comers and notable festival performances.

This is the context California Cursed was put out in, a band on the verge of a scene wide hype. It’s clear why. The sound of beaches rolling in ease you into the California themed album before emerging the listener underwater only to come back up for air on the edge of a crushing riff. As the grunt kicking off the opening breakdown hits, you are immediately immersed in the huge sound of the album. By the time song’s final mosh call rolls around with singer Sam Ciaramitaro taunting “Go ahead / Make my day,” the band has already demonstrated they are here to stay with big meaty bass driven rhythms over thrash influenced solos and at least three other pre-breakdowns. At slightly over 3 minutes, opener “Feel The Pressure” is a statement piece.

DRAIN go on to barrel through 19 minutes of unrelenting hardcore with some thrash appeal over the next nine tracks capturing the perfect energy of a show stealing opening set. It’s here and gone before you even know it. The only time DRAIN come up for air are on the acoustic arpeggios and hammer off notes of “Hollister Daydreamer,” an instrumental transition for California Cursed. Highlights include “Army Of One” where the midpoint break down puts the band in similar territory as the bassy groove of the Suicidal Tendencies. The heaviness of “White Coat Syndrome” captures the nu-metal leanings of some of the scene’s recent output, but it’s also held together with classic thrash soloing à la Mindforce.

California Cursed is about the tear and pull of living in California. The eponymous closer captures the tension of living in the Golden State and the contradiction of what makes it golden. “Always sick of home / Always home sick / Working paycheck to paycheck / To pay the rent,” hollers Ciaramitaro before admitting the state he was born into has swallowed him whole and set him free. Throughout the album, DRAIN cover personal statements of what makes them tick, how California shaped them, and what they fear to lose.

And just like that, California Cursed is over with the sounds of the waves fading over an unnerving surf rock riff sample. The 22 minute runtime makes the album easy to repeat as every break down, and there are plenty here, delivers harder than the previous.