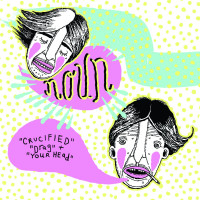 Noun is the solo project of Marissa Paternoster of Screaming Females. Sometimes she uses the form to create decidedly non-Screamales style music, such as the goth masterpiece Throw Your Body on the Gears and Stop the Machine with Your Blood and sometimes she uses it to just kick out some idea jams, as with Slug from two years ago.

The “Crucified” EP seems to walk the line between these two extremes. The title track finds Paternoster again ripping on her guitar. But whereas with Screaming Females she tends to riff it up and thrash it out, here, she’s leaning into ‘90s alt-rock territory texture wise, alternating between using the guitar as an instrument to conjure feeling, instead of notes, and then just smashing out huge, distorted, chunky riffs. As is her style, she paints wonderfully surrealist poetry on top of these big backdrops. As Paternoster has shown on SF’s Rose Mountain and All at Once, she’s getting better and better at SOUL- that is, we all know Paternoster can out shred anyone on the block, we all know she can out sing anybody with a set of lungs, but here, when she utilizes space in conjunction with her exploding talent, she really hits to the core. It’s also interesting to hear her play with Catholic imagery, considering the fact that she went to catholic high school, and as per some interviews, found the forced-conformity there somewhat comforting. The track certainly doesn’t seem to be an endorsement of religion, but in Patti Smith (and even Nick Blinko!) style, Paternoster is comfortable enough, and skilled enough, to use these ancient symbols to make a contemporary point without dropping into cliché.

The flipside has two reworked Slug tracks. “Drag” appears to be a deeply personal track, though she might be writing from the perspective of someone else. It’s a gentle take that somewhat echoes Gears where she laments “They don’t take me out anymore, I’m too much of a drag, I’m a lame horse.” Paternoster is able to walk the fine line between portrait and “boo-hoo-is-me” and we find that we’re on her side with the track. Is it because she’s compelling or is it because we can see ourselves in her?

Closer “Your Head” again finds Paternoster taking us to the surrealist-psycaheldic plain. Between mountain-sized riffs and spooky-soundscape, she calls out “Crawl in your head with me!” I don’t know what that means, but as she wails on the song’s dark second half it sounds like Beetlejuice, or at least Peter Murphy, should be dancing around and it makes me feel like I know what she’s talking about even if I don’t. That’s art, and fittingly enough, harkening back to the title track, you could say that’s Religious symbolism, too.