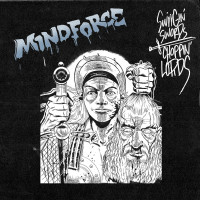 In early 2019, severe injuries caused by a near-fatal accident for guitarist Mike Shaw resulted in an indefinite hiatus for the band. The timing was unfortunate, as Mindforce was just revving up to support their pulverizing full-length debut, Excalibur. Continuing without their dear friend wasn’t an option, as their focus then shifted to the support for Mike and his recovery.

Charged up and recuperated, the full-squad returned with more intensity and push-and-pull fan comradery than ever before. Now, close to a year later, and still chuggin’ along from Excalibur, the crowd-slayers from the Valley reveal four new weapons added to their already loaded arsenal. Swingin’ Swords, Choppin’ Lords is sharp and puncturing; it’ll slash through your core and dispose of you in a wide-open pit where the dwellers are waiting to rip out your guts. On their new EP, Poughkeepsie’s Mindforce augments their crisp licks and towering breakdowns with seven minutes of thrashy, 90s-style beatdown hardcore.

Judging by how quickly the first pressing sold out, it’s clear that the hardcore community and their followers, all crawling out of their own skin in isolation, were in desperate need of fresh aggression. Right from the jump, Shaw’s piercing and metallic chords on the title track act as a siren call for the stomping and swinging swells to form. Jay Peta, with his snarls and swervy delivery, explodes over the crossover-driven riffs that barrel into the following track, “Fratello.” Here, Peta creates another famed Mindforce mic-share moment in “How do I stop!?” that pops big chunks and air-pounding rhythm for two minutes straight.

Their 80s-thrash influence comes to the forefront on “Hope Dies In the City,” the most textured and versatile song on the release. It opens with a trampling cadence that’s elevated with Peta’s snarky and smooth flow. Then, powered by Shaw’s breakneck soloing, they shift it into full throttle midway through with a rushing and escaping tempo reminiscent of music piped in over vehicle chase sequences. “Hellscape” blazes with thrusting speed; and with a final strike, it delivers the death blow of the record with a massive, floor-shattering breakdown.

The tight and compact rolling heaviness of Swingin’ Swords, Choppin’ Lords is ready to take hacks at unsuspecting venues everywhere. These tracks were made to open up a room, and are sure to be setlist staples – all four of them – when things do open back up.

Alestorm: Curse of the Crystal Coconut