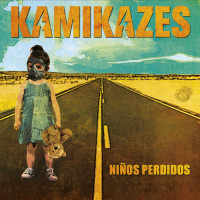 Kamikazes, born out of the ashes of the band Carroña, brought to life ‘Niños Perdidos’ last year. They certainly set a quite remarkable debut.

From the the first point of contact, they perform with a passionate rage of heartiness that continues with "Se va a Caer". That track opens up the album with a hardcore vibe and a subsequent foot-tapping rhythm. The solo in the song, amidst that raging punk attitude, gets to a calmer place after the vocalist sings about rebelliousness, about being poor, and corruption.
br/> The lyrics hold emotional weight in "Somos Leyenda" and "Circo Interno" and all throughout the fast-paced album. It’s almost outstanding the way they crossbreed inciting fiery speeches with catchy rock melodies.

Some Niños Perdidos rhythms ride behind the posthardcore spanish wave, making it sound like the chart-topping song. In "Nada es Eterno" and "El Ojo del Huracán" the guitar has a key role to play, displaying the powerful capacity punk music has to touch deep issues while being an approachable form of music.

The band touches the concerns of angry youth in part through the spoken word sections added throughout the album.

The album gets to the finish line reaching the top with "Naufragio", which utilized grunge and distorted elements that make the song such an atmospheric masterpiece.

Alestorm: Curse of the Crystal Coconut