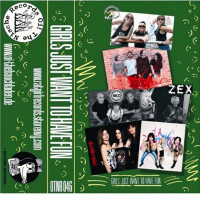 The fine folks at Ratgirl Records in the States have teamed up with Oi! The Nische Records out of Germany to compile a solid collection of female fronted punk bands from all over the globe. I personally think it is extremely lazy when someone uses the term “female” or “girl” to describe the genre of a band. This tape compilation showcases the disservice such a classification would present. This comp spans various sub genres of punk and good ole’ fashioned rock n roll.

On the tape, Berlin’s WHAT (With Highheels AgainsT) offer three tracks of the post-punk / wave variety. “Frontex” comes strong with buzzsaw guitars and an impressive moving bassline. “I’m Addicted” is a bouncy new wave track that will have you dancing. “Their Money” is a major highlight of this comp. This is a poppy 80’s style track with some ska undertones. One is reminded of current pop ska heroes the Interrupters. Next up are newcomers L.A.Machina from the States who feature Rikki Styxx, most notably from the Dollyrots, who drums in this outfit. This raunch n roll band offers “I’m Not a Man” to start. This garage rocker features classic riot girl vocals and solid guitar solos. “Highway of the Night” is a mid-paced rocker that combines the best elements of AC/DC and Motorhead. This band has an upcoming full length on Alternative Tentacles which I expect to make waves.

The second side of this cassette begins with the Oi band BKD from Croatia. “Balkan Boi” showcases BKD’s strength in utilizing effective call and response vocal patterns in the chorus. Solid vocal ranges on “Jebem Ti Radne Subote” carry throughout the track. Hints of Stiff Little Fingers and the Clash are present down to the breakdown in the bridge. The BKD set here closes with “Lepo Je U Raju.” This is another fine Oi rocker that highlights the band’s strength in using backup vocals. Next up are Germany’s Tortenschlact. This band infuses a perfect mix of both crossover metal and UK82 on lead off track “Assiholer.” This one will appeal to fans of bands such as Discharge and Broken Bones. “Die-Leute” showcases powerful vocals throughout. “Verpiss-Dich” will have you skanking in the pit. The riffage and breakdowns throughout the track will take you back to the first time you heard Dirty Rotten Imbeciles. Psychords from Italy close out the flipside of this cassette. These ladies have spent some time spinning some Ramones. “Save My Sanity” is a solid mid-pace rocker with effective call and response backing vocals. The band sounds like the Go-Gos on speed on “Slave” which is a steady new wave rocker. This track sounds like it was lifted from your favorite 80s movie. The Psychords take their love for Ramonescore to the max on the set closing “I Wanna Live Like Joey Ramone.”

This compilation should be approached as more than just a female fronted collection of tracks. This cassette showcases the global variety of punk rock still going strong today. The best part of writing reviews is the chance to discover new bands. For me, the majority were new to my ears. This compilation successfully proves that “female fronted” should not be pigeon holed as a separate genre. These bands all hold their own quite well in all of punk rock.

Bystander: Where Did We Go Wrong?