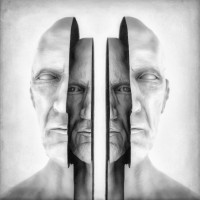 I think it’s important to acknowledge that a lot of the records that I review here are a) not what people might typically associate the site with and b) are records that I’ve listened to, enjoyed and think are worth bringing to people’s attention. The upshot of this is that the average review of one of ‘my records’ that I write will normally be pretty positive. It would be a slightly self-defeating process to be repping for the metal end of the spectrum and then bring a load of shit to people’s attention I guess is what I’m saying. But even I, an apologist for metalcore, nu-metal and some of the more frequently criticised sub-genres, demand a degree of authenticity and commitment if I’m going to enjoy a record involving those elements. Can you see where this is going yet?

I was introduced to GroundCulture recently when an acquaintance said I might like them. Actually, they had said they were a bit like While She Sleeps and this is why I might like them. (For those unfamiliar, we’re in the more modern, polished metalcore area, here.) I can certainly see why the comparison would be made, but I think doing so rather misses a large portion of what WSS do so well. Ok, there are modern production/electronic elements that creep in, there are big riffs, breakdowns and a harsh vocal that isn’t a million miles away from Loz of WSS and if I’m completely honest, there are moments when it feels that GroundCulture are just straight up emulating WSS’s sound. But there are distinct issues here. “Unbreakable” for example sounds so much like a cut-price version of “THE GUILTY PARTY” from WSS’s last record that I can’t quite hear anything else when I listen to it. Similarly, “Blue Minds” feels like a disinterested version of “Steal the Sun” from You Are We. Unfortunately for GroundCulture, they’re not in the same league as WSS, so their efforts fall somewhat flat. And yet these examples are still the best the album gets, for my money.

Putting it bluntly, when listening to this record, the only times I sit up and notice any specific aspect, it’s because the aspect in question feels suspiciously familiar, jarring or ill-judged. There’s a guest spot on the appallingly-titled “Dream Like A Child” for Philip Strand, for example. I’m happy to admit I didn’t know who Philip Strand was prior to writing this review and I’d be happy to return to that state of affairs asap, frankly. As far as I can make out, his oeuvre is exclusively that of insipid, contemporary EDM filler. You know the sort of thing; I’d be astonished if he hasn’t used the line ‘Castles in the sky’ in one of his songs, basically. Also, the decision to close the album off with an acoustic, whiney piece of sentimental drivel entitled “1974” is another display of a lack of self-awareness and also showcases some unappealing vocal gymnastics from Roy Watson, sadly. Some of the other moments that make me wince include the sample lead hook on “REALEYES” (they’ve even taken the all caps song title thing from WSS, it seems) and both the moments of falsetto and rapping (yup…) on “Take My Breath Away”. Not good.

I accept that maybe I’m not the primary demographic for GroundCulture, but I think that I could have been a lot happier about this record than I am. Some of what they do falls into the wheelhouse of music I like, but it feels like all of their best moments are lifted almost directly from other bands. And when they do things that are more their own, it feels rather like they’re pandering to the pop-oriented rock music listener, which unfortunately somewhat infects the record on subsequent listens as you can’t help discern more and more saccharine and sanitised creative decisions. It also seems this unpleasant aspect looms larger as the record draws on, with 2 of the worst offending tracks closing out the record.

It’s not that these guys are worse than most of the shit that passes for ‘rock music’ in the UK charts I should point out, it’s just that when there is such a rich vein of quality and originality running through heavy music at the moment, then something that feels so much less vibrant, exciting and novel, yet seems to be garnering interest, is notable primarily for those points. Who knows though? Maybe GroundCulture will serve as a gateway, bringing more people into heavier realms and that’s a worthy cause. I can’t imagine that’s their intention, however.

Bystander: Where Did We Go Wrong?