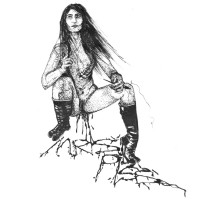 Those of you who know Chelsea Wolfe will also know she has a rare talent. Unique, haunting, powerful and endlessly creative whilst maintaining a level of quality control that many artists could benefit from. Jess Gowrie, the other half of Mrs Piss, has worked alongside Chelsea in the past (they made up guitar/vocals/drums between them in the doom-tinged rock band Red Host between 2006-2008) and has worked with Chelsea and many other artists in the intervening years as well. Jess is also prodigiously talented. Contributing as she does at various times, drums, guitar, bass and programming to this project, leaving vocal and lead guitar duties primarily to Chelsea.

For those who are less au fait with Chelsea Wolfe’s canon of work, I’d better try and summarise for context. Across her career Chelsea has dabbled in rock, doom, metal, Americana/folk with electronics featuring intermittently, too. It’s this breadth of styles whilst maintaining such high quality that makes her a standout artist in my opinion. Never one to stay in the same place for long clearly, Mrs. Piss was born back in 2017 when the two contributors were together, touring Chelsea’s Hiss Spun. It’s at this point that I get the rather exciting job of explaining what this record sounds like. And that’s not going to be easy, which seems absurd when you consider the album is made up of 8 tracks across less than 19 minutes.

Chelsea Wolfe has an extraordinary voice. This isn’t news to anyone who’s heard her in the past, but rest assured it’s still here and it’s as astonishing as ever (as I type this, I have goosepimples on my arm listening to the title track). It maintains its trademark dark ethereal quality which so many know and love, but the musical canvas it’s set to this time out is quite different. Though there is great variety here, the beating heart of the record (and I think a lot of this is thanks to Jess Gowrie’s superbly organic drumming) is made of dark, garage rock, however, there are rumbling, throbbing synths that underpin some of the songs with a doomy, industrial inflection. But even beyond that, there is more at work. In the case of “You Took Everything”, lead single “Downer Surrounded by Uppers”, and album closer “Mrs. Piss” especially, though that garage rock framework is the bedrock, there’s an almost Tarantino-esque sinister cool that underpins even that.

The best I can describe the sound and effect of this collection of songs overall would be a Sub Pop-meets-Desert Sessions vibe. I hear bits of Mudhoney, PJ Harvey, Babes in Toyland and even NIN. At times, it’s heavy, woozy, experimental, yet it retains that ‘plug n play’ aesthetic that makes it still feel, well…punk. It also has a liberal dose of disdain infused in it. From opener “To Crawl Inside” which has the refrain ‘I’m bathing in the filth of the world’ repeated over the 2nd half of its fleeting runtime, you can tell this isn’t going to be a happy journey, thematically speaking. Similarly “Nobody Wants to Party With Us” has incredibly dark lyrical themes, but in the second half it swells into a throbbing, sinister, 80’s synth-doom-punk number that is oddly danceable.

I’ll stop skirting around it. I think this record is incredible. It exists in a world of paradoxes: It’s both incredibly brief yet expansive. It’s highly experimental but feels DIY, it has a sinister, swirling atmosphere throughout, but still delivers energy and tempo at the right points. My main issue with the record is it’s just not long enough. I often complain about the opposite, but I could gladly listen to a lot more of this. Mrs. Piss is the side project I didn’t know I needed. And in a year where crushingly bleak developments have become the norm, this is one surprise that bucks the trend whilst feeling somehow incredibly apt for our increasingly dystopian times.

GroundCulture: How Well Do You Really Know Yourself?