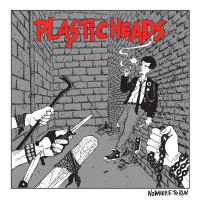 This was my experience with Nowhere To Run by the Toronto-based PlasticHeads; a super-group of sorts featuring current and ex members of bands like The Vapids, Brutal Knights and Career Suicide among others. Straight-up, hard-nosed punk is the simplest way to describe what is going on here. Beefy guitar riffs played at a breakneck pace with pissed off vocals and an overall vibe implying that the listener really has nowhere to run. The first track, “The End Is Near” has great energy and could set the tone for any circle pit. The songs that follow do not stray from this path whatsoever and 18 minutes later it is all over.

Some might say, so what? Power chords, fast beats, two-minute runtimes – it’s all been done before. It has, but perhaps that’s even more reason Nowhere To Run grabbed my attention. I already own dozens if not hundreds of albums that carry most of the same qualities by bands that likely all formed before 2005. While many of the classic albums in this genre are celebrating some sort of anniversary with exclusive vinyl re-releases and live album sets at gigantic festivals, I find it refreshing to hear a new band with new songs deliver the same sort of energy on an album that I felt on so many from other bands years ago. My sole complaint with Nowhere To Run is that only 10 has songs. I really feel like another two or three songs would up the ante and make this a near-perfect addition to my music collection.

Lastly, the artwork deserves special mention as it really adds to the overall aesthetic of a gritty, tough punk album that would not be out of place 30 years ago. Filling the cover of the LP jacket is a black-and-white, hand-drawn scene of a lone punk rocker cornered in an alleyway with nowhere to run. Armed with only a switchblade while enjoying a smoke, he gazes towards what could only be his oncoming attackers. However, the viewer only sees a few extended fists clenching weapons like a crowbar, a baseball bat, a chain and a couple more switchblades. Does the lone punk take these attackers on? Does he get beat up? Does he beat them up? Does he offer a truce? The only thing we know for certain: he has nowhere to run.

Broadway Calls: Meet Me on The Moon [7-inch]

Hayley and the Crushers: Jacaranda [7-inch]