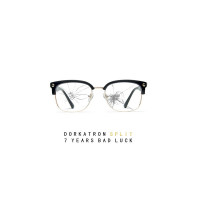 Split records are sometimes tough to listen to or difficult to review. The listener has the tendency to compare the two bands, which could be somewhat counterproductive. But that’s not the case on this one. The bands, both of which hail from Austria, are similar enough for the record to flow well, yet each band has a distinct sound.


Dorkatron starts things off with one of the catchiest songs on the record, “Robotic Love”. This was my first time hearing both bands, so I was happy that it caught my attention immediately. But truthfully, any of the songs on this record would have grabbed my curiosity just as quickly. The band plays around with the nerd rock image, as evidenced in their promo shots, the song titles and lyrics , and even the album art (a pretty clever combination of both band names). The lyrics seem to be purposely elementary, a wise little trick. But their sound is far from nerdy. The first three tracks (“Robotic Love”, “Custodians”, and “Shopclass”) are 2-minute blasts of heavy toned guitars, rapid drumming, Ramones progressions, pop-punk melodies, and sweet harmonies. “Hall Monitor” continues the sound and theme, but slows the tempo down a bit. “My Girl” could have fit perfectly on Short Music for Short People. I love the simple, yet profound lyric, “She’s my girl, not your girl”. And “Pills”, which rounds out Side 1, is arguably the best song on the Dorkatron side. Maybe because the song structure is slightly different. Or maybe because the sound skews a bit from the rest of the record, particularly during the chorus. Either way, it’s a clever way to end the first side, forcing us to pay more attention the second time around.

On the flip side, 7 Years Bad Luck come out swinging right away on “Comatose”, with a hardcore-esque opening, gruff vocals, and a catchy chorus. The next track, “Out”, changes the feel slightly, adding some skatepunk to the mix, without straying too far from the overall sound of the album. This track, as well as “Milk Teeth” (track 11), which remind me a little of NOFX, are a welcomed change. “You, The Ocean And Me”, slows down the tempo and is reminiscent of some Wizo songs (the songs they sang in English). “Better Joke”, probably my favorite song on this side with it’s killer opening, combines a little bit of everything on both sides of the record. It’s a pop-punk song at heart that’s rough around the edges, enough so that it doesn’t cower at all from the punk rock sound. And “Movie Star” closes the record, forcing us to be patient, making sure that we’re still paying attention.

I love when I’m able to listen to a band for the first time and get sucked right in. And it’s even better when it’s 2 bands! This split has made me a fan of both groups and I’m definitely going to check out their back catalogues. And this is undoubtedly a must have for fans of either band.

Hayley and the Crushers: Jacaranda [7-inch]