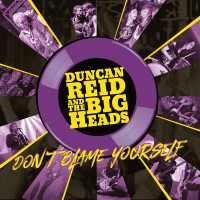 Duncan Reid and the Big Heads

The thing is, Duncan Reid might be in a bad place mentally, but you’d never be able to tell it from the sound of the new album. Even the title of Don’t Blame Yourself suggests a certain bleakness and failure, but, by and large, the album is among the power-poppers brightest sounding recordings.

Reid earned his stripes in first wave punkers The Boys, cutting 120 second snappers that owed as much to revolution as it did to the Beatles. Even though the Boys had their fair share of counter-culture tracks, it always seemed like Reid had his eyes and ears more focused on matters of the heart than the newspaper. So, when he split from the re-formed boys in 2011, he started Duncan Reid and the Big Heads which was basically the distilled version of Reid’s Boys contributions.

The group’s fourth album, Blame is the distillation of the distillation. As artists enter their dreaded mid-period (“Reid even comments on this in the album”), their recordings can sometimes feel like watered down versions of their classics, or, gasp, worse- weal acoustic versions. To Reid’s credit, it feels like instead of letting his vehicle rust, he’s been working on it non-stop. Here, pretty much all the tracks are short and punchy and oh-so-pop in the classics AM radio sense. That’s good. If you like the Boys or Reid’s previous work, this is the richest taste yet.

Yet, therein this accessible curve, he sneaks in what’s probably his darkest themes. “Motherfucker,” which has the word “Motherfucker” cooed like other artists would sing “hey baby,” finds Reid crafting lyrics that apply equally well across the pond. “Tweets God save the queen and makes it sound obscene/ motherfucker” he calls out. “And nanny’s always keen to clean up where here’s been… what a fucker!”

Or there’s “The Grim Reaper” which has the air of the Lennon-McCartney psychedelic years (before they hated each other). But whereas John and Paul kind of had opium-fun drifting through fruit fields, Reid takes the airy melody and hums, “Hear me singing these old fashioned songs/ all designed to make him sing along / see him lurking… always out of sight.”

But, it’s not all death and doom and gloom. The band keeps a self-aware humor throughout the run time. “Ballad of a Big Head” is propelled by a soaring guitar while Reid pokes fun and salutes himself in equal turns (that’s the way to do it): “Hey here I go, Well, I’m a rock star don’t you know?/and Hey, I’m as old as the hills.”

And that’s what’s interesting about the release. Reid and crew take time to look at the darker aspects of the world and the fleetingness of the flesh- we do gaze directly into the eye-sockets of the Grim Reaper more than once. But, despite the sampling from dark stills, the Big Heads pick themselves up from the slow, constant ravages of life and keep on strumming, focusing on happy melodies, which in a way, speaks more than words ever can.