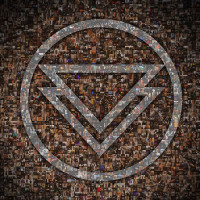 The world is a bleak, miserable place at the moment. It has been for a long time now for many. Even relatively speaking, a group of people who’ve had a particularly unpleasant time over the last 5 years are The Ghost Inside. Whilst touring their 4th studio album Dear Youth in November 2015, the band’s bus collided with a tractor, resulting in the death of both drivers. The remaining 10 people on the bus survived, albeit in some cases with significant injuries, including drummer Andrew Tkaczyk losing a leg after a 10-day coma and other band members also being hospitalised in critical condition. The band’s first practise as a group since the accident wasn’t until April 2018 and when, in January 2019, photos of the band in the studio emerged online, it was met with almost universal delight from anyone who was aware of their circumstances.

In the years since, The Ghost Inside have become something of a metaphor for triumph over adversity. Their music, despite its innately aggressive nature, had always been infused with positivity and listening back to their discography at this point is an undeniably affecting experience. The songs now retrospectively burgeoning with an even greater emotional weight that one doesn’t often encounter in the genre. That brings us to this, their comeback, self-titled album. Opener “1333” starts unapologetically with a roared ‘TGI! / From the ashes brought back to life’ against machine-gun syncopated riffs and Jim Riley’s rumbling bass. This pretty firmly sets out the stall for the album’s tone; It is one of robust defiance. The next track “Still Alive” sees the band bellowing the song title in unison, along with posi-bomb lyrics from lead vocalist Jonathan Vigil. The old adage he delivers of ‘What doesn’t kill you makes you stronger’ never having been more accurate and making the band’s resolve even clearer. With other song titles such as “Aftermath”, “Phoenix Rise” and “Begin Again”, it’s clear the accident has provided a deep well of creativity for the band to draw from. Musically speaking, the riffs are huge slabs of metallic power, with all members driving forward as a unit to deliver real impact through breakdowns and choruses alike. The guitar tone is spot on for the style – thick-textured, but with enough grit to stay well away from the pitfall of sounding too polished that many other metalcore bands fall into. There are however, swathes of melody and lead guitar hooks, too. The rhythm section are simultaneously tight and dextrous, whilst feeling completely unified with the rest of the band throughout. On reflection, TGI are maybe more accurately a hardcore band who have managed to capture and evoke more fragile emotions. Not something many others are capable of, or in most instances, would even attempt.

There are a lot of dissenters of this style of metal/hardcore in the world today, it’s fair to say. But using this record as a yardstick, it’s clear that when done well, this is a genre that still has so much to give. At points The Ghost Inside manage to remind me of Counterparts, Stray From The Path, Knocked Loose and even occasionally A Day To Remember at times (not least “Make or Break” which actually features Jeremy McKinnon who claims co-production credit for the song as well), but ultimately they still sound first and foremost like The Ghost Inside. Zach Johnson and Chris Davis’ guitar work encompassing the brutal hardcore and more subtle, twinkling post-hardcore aspects equally convincingly. I listen to a lot of this kind of metalcore (or whatever you want to call it at this point) and whereas most bands excel in one area, TGI have managed to raise all aspects of their game to an equally impressive level and the result is something endlessly listenable. Some people will rail against the fact that it’s not your typical tough-guy hardcore approach, but that’s absolutely key to this record’s success.

I’m not sure many bands could summon such optimism, determination and such an anthemic, fist-clenching collection of songs from something so harrowing. Between this band’s members, the broken bones, days in comas, limbs lost and surgeries undergone probably reach into 3 figures. Yet the experience has galvanised what made them a good band before; and turned them into a great band. Yes, it’s produced immaculately (Fit For An Autopsy/END’s Will Putney in a rich vein of form at the moment), the performances are superb throughout and it feels almost spookily prescient in tone and lyrical content, but it’s the fucking heart of this record that really hits. It’s bubbling over with an intoxicating intensity and sense of righteous recrudescence that is utterly beguiling and energising. I suppose if you didn’t know the history or if you just wanted a record to snap your neck to, then this will still do everything you want. But if you want to tap into the sound of a band coming back from the brink, bound in blood, full of fire, hunger and literal joie de vivre, then The Ghost Inside have done it as well as anyone could possibly hope for. Final track and recent single “Aftermath” says it most succinctly with a mosh call for the ages:

P.S. This review was written prior to the recent allegation (and subsequent admission) of the use of racist language by Jim Riley

Duncan Reid and the Big Heads: Don't Blame Yourself