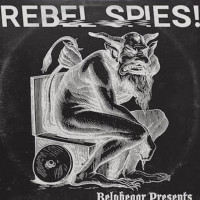 I discovered Rebel Spies a few years back when they put out their debut EP, Before I Die I Shall Destroy the Rebel Spies!, on East Grand Records. Their full length, Rise!, which was on Underground Communique and also included the EP songs, was a favorite of mine from 2017. A couple of years ago, they announced plans for a split LP, and then went silent. Well, it turns out the other band broke up, and the project was abandoned. Now, the songs intended for that split have surfaced as Belphegor Presents.

Rebel Spies are a Detroit quintet made up of punk vets from bands like Telegraph, Hellmouth, Bastardous, Suicide Machines and a bunch more. They play a melodic style of hardcore, musically influenced by bands like 7 Seconds, Bad Religion and Dag Nasty. The lyrics are influenced by horror movies, comic books and the occult. So is the packaging and imagery, but clearly, they’re still able to maintain a healthy sense of fun.

Belphegor Presents is five new songs that cover quite a bit of the punk spectrum. The 1st song, “Traitor”, is blast of thrash and hardcore. The lead vocals are nearly screamed, but there’s still a hook when the chorus rolls around. The 3rd and 5th songs are sort of similar. They’re super fast and aggressive, with maybe just a hint of political defiance. After repeated listens, these songs are not as straightforward as they appear. There are a ton of cool little crunchy guitar riffs and vocal melodies. I think the production is tops too. It’s nice and clear, but still raw, like punk should be.

In between, the 2nd song and lead single “Voldin (She Lied)” is super melodic and comic book inspired. (Apparently, Voldin is the second city of the underwater worlds. It is a frozen land where art is outlawed and free thought is considered dangerous. Sounds like a barrel of monkeys.) “Monster Kids 77” might be proof that these punks also listened to a fair amount of Dio and Dokken growing up. The hook is huge. Like MTV in 1985 huge, but still a little spooky.

Rebel Spies are not the most prolific band in the world, but everything they put out is good. I suspect that’s the result of their many individual trips around the sun. They have certainly always resonated with this fellow geezer. You should check them out. I think there’s a pretty reasonable chance that they’ll strike a chord with you too. Not to sound like a broken record (pun intended), but Belphegor Presents is another digital release that deserves to be cast in wax.