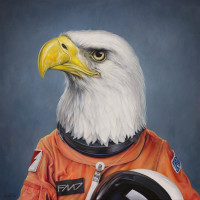 This has been a turbulent year to say the least. Luckily, the vast amount of stellar pop punk releases has been there during the first half of 2020. Shield Recordings from the Netherlands has teamed up with Mom’s Basement Records from the States to deliver the sophomore effort by European heavyweights Giant Eagles. For those who are unaware, this band consists of veterans of the scene from bands such as the Apers, Windowsill and Lone Wolf. Giant Eagles blend Ramonescore with a healthy mix of 80s synth pop.

“Bloodlust Tonight” sets the tone for a very well-balanced album. This track features all the best elements of an 80s Ramones song with strong keys setting the pace. Fans of new era Lillingtons should take note as well. “Everything Is Lost” is a mid-paced tempo power pop track that boasts solid harmonies. Early Riverdales vibes are strong on this number. Giant Eagles kick it up a notch on “My Wish Is Your Command.” Solid four to the floor high hat hits are present throughout. “Evil Robot Nation” showcases the band’s ability to write a catchy new wave synth-driven track. This tempo and style are present later down the track list on “Supreme” which sounds straight out of an 80’s soundtrack. The band is not afraid to adopt a darker tone as well. “Lost My Heart Overseas” is melancholier and features many “whoas” throughout. On “Soundbound” Giant Eagles take an almost goth rock approach while maintaining a solid melody. “Outta Love” is a more standard 90’s Lookout Records style pop punk jam. Vocally, the tempo and range are reminiscent of Dan Vapid. This tempo is consistent on “Zombie Apocalypse” that follows. There are many quick tempo changes throughout which is symbolic to most bands in the Ramonescore bubble. The subtle keys throughout the verse and chorus are perfectly minimalistic yet effective. Giant Eagles close the set with the dark rocker “Put One In The Chamber” that tells the tale of giving up hope. The tone and tempo are very gentle for a track which is extremely heavy, lyrically.

Giant Eagles have offered up an album that will be certain to make most top 10 lists for pop punk this year. The main attraction to this release for me is in both variety and balance. The tracks are properly and effectively sequenced to make for an interesting listen. Furthermore, it showcases the band’s ability to craft varying styles of songs. In an era where many are trying to recreate the classic 90s pop punk sound, it is a breath of fresh air to have a band who truly and successfully show creativity.

Build Them to Break: Lucky Strike