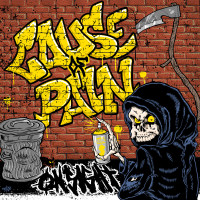 After four decades of evolution, hardcore, or at least the type bred in the Northeastern states, has seemed to circle back to the beginning. Granted, the beginning was an exceptional place to be. Today, the old school simplicity and grit have as much a home in the hardcore community as ever, but often the homage is diluted by outright declarations of ones intention to “bring it back”.

On Cause of Pain, New Jersey’s On Sight make a real old school hardcore album, with surprisingly accurate attention to the details that made the first wave so iconic. And they do it with enough vigor and finesse to make their own mark in the scene; not just carry on those who came before.

The record is, of course, very brief. 7 songs in 16 minutes usually means three chords and a shout along, with little room for adventure. But On Sight take advantage of every last second of tape. The songs are longer than their run time, implementing changes in tempo, vocal style, and tone in a snap. It keeps you guessing while keeping you slamming. Few albums that are as aurally interesting as this one, are also as rampant ragers as this.

The thing is though, this isn’t ‘hard for the sake of being hard’, which is usually quite boring. Cause of Pain is expertly assembled to give it texture and depth, while remaining true to the genre. The vocals and guitars are inseparable, one almost never trailing the other to go off on its own (you don’t know how much I MISS that). The guitarists dare to vary models and tones on a hardcore record. The double kick comes in only when necessary, like to accentuate a shift in mood, rather than being hit incessantly from beginning to end. Backing vocals are used very sparingly and placed perfectly. The point is, its not always about what sound you make; its how you make it.

In short, On Sight is how it’s done. Cause of Pain has me excited, and at times downright exhilarated. It’s a quick listen, but definitely worth your time.