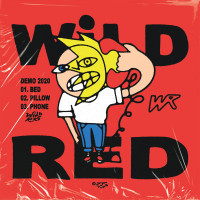 When I was sent this demo, it was like receiving a package that had been punctured and poorly taped together while the fragile contents inside remained in-tact. At the core lies an introvert who’s been through the wringer, personified through a brand of fuzzy and distorted pop-punk. These three sappy and reclusive songs fill the space between the four walls where Wild Red exists. “Bed,” “Pillow” and “Phone” act as tangible objects that help to conceptualize a voluntary detachment from the outside world where confinement forges creativity.

This debut release from Wild Red is rooted in the hardcore haven of Wilkes Barre, PA, but it pulls more from the softer, emo-ish style of many of the bands who’s seeds remain twenty miles up I-81N. What pulled me in immediately is that these tracks are, in fact, immediate. They’re so simple and instantly absorbent that it almost makes them authentic. The construction is not crafted around the hook, but rather, the hooks come naturally from the melodic flow that precedes them. It’s five minutes of sticky and woefully charming singalongs in the vein of Culture Abuse or Beach Slang.

As much as the songwriting seems distant, it’s as equally inviting. Crawl into “Bed” and you’ll lay there tossing and turning, trying to wrangle in your wandering mind as it repeats “I’ve been trying honestly / I’d do anything to clear my head / But life looks so better from my bed.” You try to drown it out by burying your head in the “Pillow,” but instead, the pillow unearths the thoughts of a relationship previously buried deep inside. “I stay out all night / And wait for you to arrive / But you always leave” brings it all back, and your restless legs become rampant with the hip-swinging tempo that comes with it. You grab your “Phone” and confess, “You’re my best friend / I’ll be with you until the end” as you drift off into life behind the iridescent glow.

Wild Red are in their infancy, writing candid and unusually digestible music from their own isolation. There’s a loner mentality in their approach, but in real life, they’re part of scene syndicate that’s ready to pop. Every few years, this bleak, yet overtly proud corner of Pennsylvania produces a core of talent that is polished locally and then sent off for a national takeover, and incredibly, in some cases, global success. It’s about to happen again, where homegrown hardcore will surge alongside gothboiclique-core, and Wild Red will be right there balancing them out.

On Sight: Cause of Pain [EP]