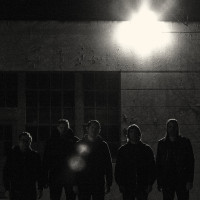 Only their third full length in 15 years, Western Addiction’s Frail Bray takes advantage of the band’s knack for putting the craftiness back in hardcore. The album is certainly unlike almost any other hardcore record you’ll hear this year.

There’s no question the band’s use of language- both English and droplets of others; both in terms of vocabulary diversity and of how the meter of the lyrics is constructed- is impressive. The songs are richly layered exertions that don’t really care how simplistic you expect a hardcore song to be. While they may take the long way around getting there, the stories here play out with a sense of actual intentional structure, as long as you’re paying attention. Think of it as high school English class, deconstructing Middle Ages poems line by line. And for that, Western Addiction deserve a lot of credit. Nobody ever said smart guys weren’t allowed in the counter-culture.

Songs like “Frail Bray”, “Lurchers”, and “Utter Despair” are the more straightforward, personal ventures into all the anxieties, fears, and depressions of modern life. Of course, not without their use of convictive couplets, which thankfully don’t always need to have the most respectful of neighbors. “Rose’s Hammer I” and “Rose’s Hammer II”, the two part ballad at the halfway mark, is a rather beautiful examination of motherhood, and the potential dark side of it rarely discussed. And on “The Leopard and The Juniper”, “Wildflowers of Italy”, and “We Lived in Ultraviolet”, any remaining hints at convention are thrown aside, and Western Addiction suddenly becomes a hardcore band who really likes fantasy metal. Or, at least get eons more metaphorical. Whether having all of these concretely distinctive themes is a positive or a hinderance is up for debate.

The biggest drawback of Frail Bray is the production. The vocals remain centered and max leveled throughout most of the album, but each of the backings get their chances to do the driving in various spots. I just hoped for a little bit more variance in the overall sound of the record. Sure, its not that uncommon to leave the board exactly the same from beginning to end. But in this case, it doesn’t seem fitting that such standout lyricism is held up by such a flat backline. The only real standout tracks for production are “They Burned Our Paintings”, a wildly entertaining, spoken/sung testimony on the ongoing role of art as rebellion in society, and the closer “Deranged By Grief”.  It's a drum-driven part ballad and part slam dance, and wonderfully poignant way to wrap up the album.

Frail Bray is a smart, witty record that certainly hits a mark, even if it's not clear what the mark is. It’s uniqueness will certainly be its placeholder when it comes to choosing the most memorable albums of the year. But while it deserves praise, it’s fair to say it deserves a good level of cynicism as well. At what point does pouring on vast waves of intelligent wordplay, and inside jokes only an ancient history buff would get, cause a landslide on the slope that leads to pretentiousness and incoherence?

Middle-Aged Queers: Too Fag For Love