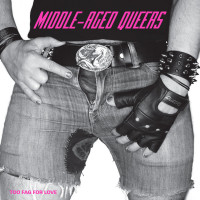 Middle-Aged Queers are just that- a bunch of LGBTA people that are middle aged. But what’s equally important is that they are a bunch of bay area punk veterans that have come together to make a ripping punk rock record. Too Fag for Love walks the line between classic era punk and early west coast hardcore. “Gary’s making biscuits” could have easily been a Dangerhouse single while “Patience Worth” has the grime and crust of Profane Existence. These people know their way around a punk riff or two, and they salute the genre without feeling into staleness or worse, reenactment.

“Bike cock”, in classic wisenheimer punk form, is basically the same line yelled over and over, getting more frantic with each attack. “SoDoMe” bears the marks and melody of the early Lookout Bands, and like those classic singles, it bends sincerity around smartass-ness. The band is making serious points here, but wisely, they’re doing through a Mad Magazine façade. That is, on the tracks, the band portrays themselves to be boneheads- the band claims that “Bike cock” is a song that urges using a bicycle instead of a car to get to your next booty call. That’s funny… but it’s also poignant. That is to say, the band doesn’t beat their chests and say “this is the important point we are making!” Rather, they crack a joke and slip the point in on the back half of the punchline. Not only is this more digestible, but it’s a lot more fun.

Tellingly, this band knows their sources and bends them to their own use. Take out the noisy feedback and the lyrics, and “Red Herring” could have been a song on Happy Days. and maybe that underscores an important aspect here. The band is making the point that the things they are covering are as old as time, and now, modern society is coming around to talking about these things with some frankness. In times of transition, there’s always some awkwardness in the initial conversation. So, Middle-Aged Queers do they smart thing- they break the ice.

Cro-Mags: In the Beginning