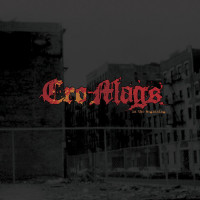 Here’s an interesting thing: Harley Flanagan is a sensitive person. If you’re familiar with Harley’s background – he grew up in a commune, he wrote a book of poetry co-signed by Allen Ginsberg before he was old enough to go the movies alone – then that might not be a huge surprise. But, in that case, what is surprising is how much of this aspect is at the forefront, albeit indirectly, of In the Beginning, the first proper Cro-Mags album in over 20 years.

We won’t go into the huge mess of it all because it looks like the battle is finally over, but for the past two decades or more, Flanagan and former Cro-Mags vocalist John Joseph have been locked in battle for the Cro-Mags name. Last year, the dust finally settled with both parties agreeing to let Flanagan take the Cro-Mags name proper and with John Joseph using the title Cro-Mags JM. So now, Flanagan is not only reclaiming the name, but he’s seeking to demonstrate how important he was to the name all along, especially since, as Flanagan admits, the band’s legacy is spotty at points.

In the Beginning, which features Harley on bass and vocals, definitively answers questions that have lingered since the early ‘80s. First, Flanagan is uniquely talented. Just as he crafted the huge, ominous rumbling on the seminal Age of Quarrel with his smashing bass, he does again here. Really, Flanagan’s bass is one of the most distinctive sounds in punk- he propels the thing with a gritty speed, but, unlike so many of his contemporaries and followers, he leaves space and ambiguity in his playing so that when he actually does charge forward, it hits like a ton of bricks. That is to say, those who felt their blood run hot when Quarrel opened with its colossal clashing will feel it again here- a lot. Flanagan hasn’t lost any of his magic, and if anything, he seems rejuvenated.

And that’s probably the key theme of the album. What made Quarrel so interesting was that sometimes, it was starkly, starkly, starkly negative: World peace can’t be done / it just can’t exist.” Yet what makes In the Beginning so interesting, is how positive it is. “No matter the battles you face / No matter what life demands / No matter the struggles you face / you gotta give everything you have,” opens the album. In lesser or less experienced hands, that could come off as preachy. But, if you’ve followed the Flanagan story, focusing on the part where he went to jail for assault and was looking at hard time (read up on this if you haven’t), it becomes evident that this isn’t some hippie-dippie dude claiming a false sense of awareness- this is a guy that’s been up, that’s been down, that’s been busted up and that’s busted people up, and this message of self-reliance and hope is his thesis. Now that’s a moving thing. See also “One Bad Decision” where he spells it out: “one wrong decision could end your life… think about what you do.”

And that’s where the key twist becomes apparent. The album finds Flanagan detailing his wounds (physical too, but more importantly mental) and deciding to rise above the things that caused damage. Yet, to be hurt, to be damaged in that way, you have to have exposed feelings to begin with. There’s even a track called “PTSD” where Harley laments “I know I can’t undo the things that I’ve done.” Hardcore is still the domain of big-rough-and-tough guys that like to let other people know that they’re big-rough-and-tough. Yet, despite the violence of Cro-Mags music, and the violence of Harley’s life, Harley has never actually fallen into that lyrical cliché. So, maybe it’s not surprising that Harley is such a sensitive guy, but it is remarkable at how much he details this in a coded form.

“Beautiful art” is a term that not usually applied to Cro-Mags as much as “crushing” or “pummeling” or “furious.” All those adjectives fit here, but this is beautiful art. The soaring arcs where Flanagan’s bass rumbles alone, crackling across the speaker, is beautiful. The simple, effective crunch of Gabby Abularch’s and Rocky George’s guitars on “two hours” is beautiful. The unrelenting, but wonderfully imperfect human, charge of Garry Sullivans drums are beautiful. The fact that the band purposefully breaks away from hardcore clichés and morphs into Eno-ish art rock, such as the violins on “Between Wars”, is beautiful. The fact that Flanagan is quite clearly being honest here, and the fact that he’s not posturing, even when he could do so and no one could question him, is beautiful. I mean, it’s loud and fast and pretty mean and heavy and rocks too, but we all knew that part was coming for the last 20 years.

Middle-Aged Queers: Too Fag For Love