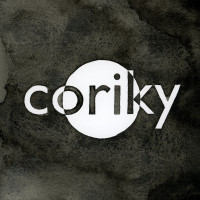 Coriky is a band from Washington DC. The members of Coriky are Ian MacKaye, Amy Farina, and Joe Lally. They were all in bands before Corky. Now that we’ve acknowledged the elephant in the room, let’s talk about their debut album.

Musically, this album falls into the post-punk/indie genre. There’s little debate to be had over that. But, it has the feel of a jazz album to it. No, not Kenny G. I’m talking about jazz. This album sounds like three musicians having who know their instruments, who know each other, and who trust each other’s musical decisions. That’s how a lot of old jazz albums were recorded, musicians building off one another’s ideas until a single cohesive song came together. And given the history all three members of this band have playing together, that shouldn’t be surprising. Amy Farina’s drums don’t work just as a time keeping element on these songs, but provide layers and dynamics as well, Joe Lally’s bass playing works with the drumming, but also have a freedom to it that provides the songs with rhythmic space while still incorporating the reggae and dub influences he’s utilized throughout his career, and Ian MacKaye’s guitar provides both quiet tension and louder moments than we’ve heard from him in years. To anyone who has followed these musicians’ careers, none of this should be surprising. It sounds familiar without ever sounding like they are repeating themselves.

All three members of the band provide vocals on this album, with Farina and MacKaye providing the vast majority of the vocals and Lally taking on more of a supporting role. While some people may say MacKaye has lost the bite he had earlier in his career, I don’t think that’s necessarily true. It’s super easy to throw your middle finger in the air and screaming the opposition into submission when you’re younger. As you grow up, you learn the importance of utilizing subtlety to draw people in, get them on your wave length, and then deliver a knockout blow that leaves them with no doubt about where you stand. The quieter moments aren’t a sign these vets of the DC scene have softened with age. They are the knowledge that your lyrics are what your message is, just because you’re not screaming them in people’s faces doesn’t make them any less poignant.

And the lyrics on this album stay true to what people have long expected from the DC scene. They are political and can shift from cryptic to a slogan so definite there’s no doubt where the band stands. The album opener, “Clean Kill”, demonstrates both of these perfectly when MacKaye sings, “Oh the terrible things she’s seen on her screen.” You know for sure he’s talking about televised violence; he attaches no specific news event to it. And these days, I suppose he doesn’t need to. The chorus finds MacKaye, Farina, and Lally joining together with the refrain of, “It’s a clean kill, but it’s not clean.” Before the song closes with all three band members again joining together to sing, “It’s not enough soap and water, never enough soap and water.” Which, to me, seems like the perfect refrain for this year so far; you can point to Covid-19, you can point to political corruption in our nation’s capital, you can point to the televised executions of African-American men on the news over the past two months, or you could point to all three. I’d venture to guess the band would include themselves and their audience in that too though, just because we haven’t done anything wrong doesn’t mean we’ve done something right. And Ian MacKaye has a long history of pointing the finger at himself, along with culture he’s a part of, as much as those outside of it.

Speaking of pointing the finger at himself, MacKaye does something that is a bit of rarity for him on this album. He makes, what I assume to be, reference to an earlier part of his career on this album. “Hard to Explain” feels like MacKaye making sense of people who feel that while he may not have ever sold out, he hasn’t stayed true to what they feel is a punk ethos. In the closing verse when he sings, “We speak in circles, no end in sight. Neither one of us will ever be right. Your position is, you want me to fix something you said I broke in 1986.” Perhaps it’s a reference to MacKaye moving further into what many people viewed as the overtly political correctness he became known for throughout Fugazi’s career. I’m not certain. But, it is a rare look back by MacKaye who has never been a big fan of discussing what he’s done, when he could be discussing what he’s doing and what he’s going to do.

Lyrically, the rest of the album feels like pure catharsis for the era we live in. With the songs shifting from at times cautiously hopeful to, perhaps, more cynical than we’ve seen any of the members be in recent years. Nowhere doesn’t this cynicism arise more than on “Inauguration Day” with the lyric, “What’s surprising is the expectation that we ever had a say about who’d be standing on that carpet on inauguration day.” The song then closes with the refrain where the word pageantry is repeated over and over again. I can’t say I’m shocked to see three people who’ve spent the majority of their lives in the nation’s capital, Lally moved to France for a few years in the 2000’s. In all honesty, I’m shocked we didn’t hear more lyrics like this more frequently. Especially since, in the days before twenty-four hour news their backyard played host to nearly a dozen different Presidents and numerous Congressional reps. This meant even if the corruption didn’t make it all the way to the evening news in other parts of the country, it was local news to them.

All in all, this is a great album. Musically, it will be at home in the record collections of anyone who likes the previous bands the members of Coriky have been in. The lyrics are poignant and they’re delivered by some of the strongest voices punk has ever seen. It’s by no means a perfect album, and it’s not likely to create a sea change within the genre. But, it is certainly one of the better album to walk the line between post-punk and indie released this year.

Cro-Mags: In the Beginning

Territories: When the Day Is Done [EP]