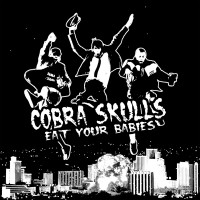 I was pretty bummed when Cobra Skulls called it quits a few years back. Their sound was so unique. The songs were aggressive, passionate, catchy, and somewhat unpredictable. The lyrics were simultaneously poignant and comical, a feat that is difficult to pull off. And as Brendan Kelly puts it, they were “just about the coolest band around.”

These ten songs were hastily recorded in 2005. The band printed 500 copies, which they sold at shows on the West Coast. And once they were gone, the band was reluctant to print more because the album was “pretty shitty.” Well I disagree. Every band probably has some cringe worthy, retrospective moments, but I have trouble believing that this is one of those moments. Of course, the band has a slightly different perspective. And some may argue that these songs don’t stand up to the rest of their catalogue and that’s probably true. But most bands would love to have a shitty album as good as this one.

If you’ve listened to some Cobra Skulls prior to hearing Eat Your Babies, you probably won’t be too surprised. Yes, some of the songs sound a bit raw, but that obviously adds to the charm. Devin’s voice sounds tattered and torn, maybe because his vocal chords aren’t trained for the long haul yet, but his smooth croon is still prevalent. This is evident immediately with the opening track “Cobra Skulls Broadcasting Co.” and continues throughout the album. I’m reluctant to define their sound, but their familiar mix of punk, folk, and Western flavor shines through on songs like “Cobra Cougar”, “Cobra Skulls Revolution”, “That There’s Cobra Country!”, among others. And their typical blend of humor and socially conscious lyrics stands out on “Donnie Rumsfelt My Cobra Skulls” with lines like “Donnie Rumsfelt my ass, he didn’t have to ask, because he stands for freedom” and on “Cobra Christmas”, a Misfits sounding observation of America’s favorite holiday.

Sadly, this is only available digitally at the moment. But still, this is a must listen for any Cobra Skulls fan. It gives you a little perspective on where the band came from prior to their releases on Red Scare and Fat Wreck Chords. It’s also a good intro to anyone who hasn’t heard the band before and may be interested in socially conscious lyrics matched with catchy melodies and aggressive punk rock.

Territories: When the Day Is Done [EP]