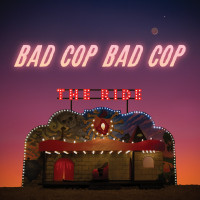 For my money, Bad Cop/Bad Cop’s Warriors is one of the greatest improvements from a first album to a second ever made. Their first album, Not Sorry introduced their talent for pop-punk hooks and their unique use of three-part harmonies, while the follow up, Warriors felt like the band was saying “Now that we’ve showed you how we do things, let’s talk about feminism.” Warriors was my number one album of 2017 for its fiercely empowering feminist anthems with infectious pop hooks that serve as the spoonful of sugar for the medicine. With such a strong sophomore outing, Bad Cop/Bad Cop set their own bar pretty high for their third album, The Ride, but did they clear that bar? Well, while there are certainly some moments on The Ride that don’t quite measure up to Warriors, there are several moments that exceed what Warriors accomplished. While maybe not as consistent as Warriors, The Ride is a slick, melodic, pop powerhouse laden with smart political observations. The biggest failings of the album come from attempts to write broad, feel-good anthems that tend to get lost in generic cliches. But those songs aren’t the bulk of what we’re presented with on The Ride, an imperfect album that can still be extremely impressive at times.

Rather than kicking things off with something quick and punchy like the first two albums, the Latin-infused opener, “Originators,” is more of a simmering, slow build that manages to build into something spectacular that has become my favorite opener of any Bad Cop/Bad Cop album. “Certain Kind of Monster” and “Pursuit of Liberty” are the album’s twin immigrant-rights songs that each look at the issue from a different point of view, and both are very strong songs. “Take My Call” is a wistful apology for wronging a past lover that’s both poignant and beautifully melodic. “Breastless” is a quick, punchy punk song about a breast cancer scare brimming with vulnerability while still being powerful at the same time.

One of my issues with this album is the album’s first released single, “Simple Girl,” which is overly generic in its I’ve-been-around-the-block attitude. Although, admittedly, the song is a catchy tune that gets easily stuck in my head. “Community” is one of the more cliched and uninteresting songs, both lyrically and musically, sounding like a particularly uninspired Rancid song in its platitudes. “The Mirage” is a very strong song until we get to the part where the album title comes from with the tired and trite sentiment “There is no destination/There is only the ride.” The album’s closing track is likely to divide the fan base, as it’s essentially pure pop with a dash of gospel and soul, with no trace of punk rock, creating a sound similar to Nelly Furtado with lyrical themes reminiscent of The Carpenters.

While flawed, the album is far more good than bad and makes for a really fun and enlightening listen. Bad Cop/Bad Cop have earned their reputation as one of the biggest up and coming punk acts on the scene, always showing a strong talent for pop songwriting as well as fiercely political lyrics, making them both powerful and exhilaratingly fun. The Ride might require me to skip a few tracks here and there, but all in all, it’s a pretty smooth ride.

END: Splinters from an Ever-Changing Face