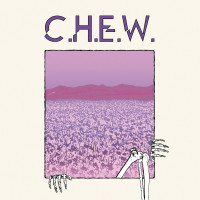 Chicago’s C.H.E.W.’s ferocious first full-length Feeding Frenzy found the foursome flexing across the hardscore scene. The album acidicly spun off into all directions and because of the velocity it was delivered at, Feeding Frenzy delivered as a melting pot of d-beat and near grindcore accompanied with the gutterul pierce of singer Doris Jeane. After a year and half since the release, C.H.E.W. have returned with In Due Time, a five track EP.

Immediately, the cleaner production of In Due Time will stand out to the previously acquainted. This isn’t to say there is radio sheen going on here, but the muddier elements of previous releases have been cleaned up a bit. This allows the vocals to be more prominent in the mix and the breakneck stick work of drummer Jonathan "Jono" Giralt to come to the forefront. Both of these elements are immediate in the opener “Knucklehead.” Jeane takes advantage of this delivering a broader spectrum of screamed and shouted vocals across the release.

The band retain some of their 80s edge in the Dead Kennedy-esque guitar bends from Ben Rudolph, but it’s more restrained to work as a transitional element between their parts. Both “Toxoplasmosis” and “Baby Don’t Fear the Reaper” contain this type of utilization. The former is also another example of the value of the cleaner production with the mids and highs of the bass driving through the song. The opening riff of closer “Noise Square” wouldn’t sound out of place in an early Tony Hawk video game.

The nature of EPs is a little different in the hardcore scene. They can often stand out on their own as a release. For more mainstream artists and even punk rock, an EP can help be a bridge to new material. For In Due Time, that’s what this sounds like. C.H.E.W. already demonstrated their prowess on Feeding Frenzy. Now the band is showing where they intend to go if you can keep up.

END: Splinters from an Ever-Changing Face

The Killer Smiles: Raising The Stakes