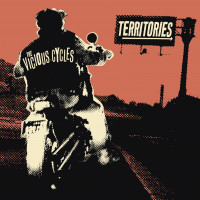 Calgary’s Territories’ self-titled debut LP was one of my favorites of 2018. It was a powerful, emotional record that made me sing along and feel stuff. Vancouver’s The Vicious Cycles’ 2019 full length, Motorcycho, was different, but a lot of fun. The VC crew mostly write jacked up, dual lead guitar, party punk songs about ripping around like maniacs on their dirt bikes.

Despite their musical differences, the bands have a couple of important things in common. First, they’re both from the vast western wasteland of Canada. More importantly, they’re both on Pirate’s Press Records. Apparently, the two bands really hit it off when they met at the PP Rock the Ship event in the Bay Area last year. These seven inches of white plastic are the fruit of their bromance.

For their side of the record, Territories contribute a jangly, catchy, upbeat track called “Prairie Twister”. (It starts with a revving engine.) It seems to be about some motorcycle riding folk hero. (It’s worth noting that the song appears to be exclusive to this release, and is not on the new EP.) It’s another good, solid Territories tune.

The Vicious Cycles pitch in an earworm called “Problem Officer”. (It starts with sirens.) It’s a light hearted song about interacting with cops, but offers some solid advice! It’s funny - the current social and political climate does make this feel a bit awkward, but the truth is, vinyl records are planned months in advance. Its revved up punk and roll, tasty organ, and thick vocal harmonies more than make up for its accidental tone deafness.

Both Territories and The Vicious Cycles are evidence of Pirate’s Press Records growing willingness to expand beyond their street-punk roots. I think these bands, while appealing to older fans, are also capable of reaching younger audiences. I’ve spoken pretty openly about my love of split seven inches, and this is a fun one. Check it out.