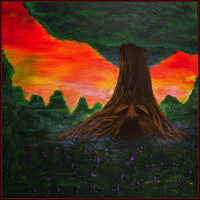 Not to be confused with…well, a bunch of other bands with the same name, this particular Hellbent hails from the rather crowded Baltimore hardcore scene. Anything Less is the bands second release, following 2018’s Regret Again.

After circling up on the intro, “Whiskey Weapons” has the band teaming up with perhaps their most well-known neighbors, Ruiner, in a sort of a torch passing of the Charm City sound that the latter has been thriving on for years. Rather than focusing on speed and catchiness, the song is emotional and gritty. The breakdowns denote a shift in mental stability; the vocals do much more pleading than chanting.

“Xoxo” and “Character Limit” break out on their own, increasing the tempo and having a little more fun. Although even if the beat gets the listener moving a little more, the pained yells of the singer’s waxing on about anxiety and self-esteem, keeps everything grounded.

Society as a whole is on the chopping block on “Pocket”, which starts with a rapid fire rant before unraveling little by little, making way to the climactic, questioning appeal on how much good all of our modern conveniences are really doing us. “Roots” is an anthem for the youth that, very pleasingly, sounds nothing like the type you’re used to hearing. And, perhaps even more pleasingly, is being performed by a band who’s members aren’t over 40. When was it decided that youth anthems can only be done by the old guys?

The title track shows up late but is perhaps the most memorable of the set; and lyrically the most positive. Everyone likes to write a song about living to the fullest and following your own path, but few can do it anymore without sounding recycled. There’s an element of genuineness on “Anything Less” that is given all the more credence by having it follow the more moody tracks. You can’t have light if there’s no darkness first.

Stylistically bookending “Whiskey Weapons”, the closing track “The Cost” gives a sense of conciseness to the set as a whole, giving the sub-20 minute EP at least a whiff of the identity of an album twice it’s length. It’s not a particularly notable song on it’s own, but it at least has the grace to serve a bigger purpose.

All in all, Anything Less is a standout hardcore record, one which doesn’t fit into any certain mould. Hellbent’s identity blueprint, while still no doubt embryonic, shows a great deal of maturity and progressiveness. Here’s hoping there’s still much more to come from these guys.