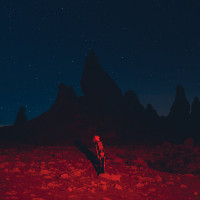 If you haven't listened to Phoebe Bridgers yet, then this is the most perfect starting point you could ask for. She's definitely a songstress of the current generation I think is unheralded but also, on the cusp of blowing up big. And I'm grateful Punisher will more than likely cement that ascension: one where I'm sure you'll hear more of her music in ads, films, documentaries and just about anything Netflix and the ilk deem necessary enough to place a grip on emo-millennials. And it's not a bad thing at all because as her sophomore effort shows, Bridgers is the kind of heart and soul we need in an era where the world's tearing itself apart.

Bridgers grew up in Elliott Smith's parts so it's no surprise to hear his influences in her music. "Garden Song" is proof of this, as well as the many other slow burns in her discography. But what I think makes this album stand out just a bit more, edgier and whatnot, from her debut three years ago in Stranger in the Alps is there's a fearlessness to embrace the mainstream aesthetic just a bit more. Not something like Lana del Rey's style or that kind of thing, but a more contemporary, alternative and dare I say poppy sound. Make no mistake, though, while the tracks here aren't that catchy, they're imbued with that indie melody which fits given her creative circle: Conor Oberst (with whom she has made amazing music with in Better Oblivion Community Center), Christian Lee Hutson and also, boygenius, where she's killing it with the esteemed Julien Baker and Lucy Dacus.

What I admire is you get the sonic signatures of all these friends as they join in on the record but it's distinctly Bridgers, her moody swings and the ups and downs in her life. The opener, for example, in "DVD Menu" has that haunting horror feel to it but that darkness is quickly removed for upbeat diversions such as "Kyoto" whose horns create such a powerful and comforting warmth. Which is what I really think this album prides itself on: emotional polarity. One minute you're dreaming listening to the ethereal hum of the title track, swimming in a shimmery sea under moonlight as you ponder the magic hidden in plain sight; the next you're torn between your life as a teen and adulthood. Bridgers just knows how to hit you and bridge that gap with raw, lyrical expression as she creates a remarkable dissonance from her own stories.

Family, addiction, sex, nature's landscapes including LA's skate parks, and pop culture in general are all themes she drifts away with but what I love is that the musical variety and overall diversity in her style just never feel tedious or like an audible chore. "Chinese Satellite" is a great example of this, coming off so cinematic with its violins to the point it's hard to argue if it's the best track or not. That's because the folky feel is also scrubbed on "ICU" which has a nu-electonica vibe that swirls with poppy accessibility and that transient sound you can once more envision on movie trailers. It's basically the indie and the sell-out aesthetics making Bridger into a Jekyll and Hyde character that you can't help but fall in love with. This makes the macabre aura of her music stand out so much too because you'd honestly expect something a bit lighter given her voice. "Halloween" exemplifies this, painting a novel with distant drums in the background about masquerading in society's normalcy and also, the two faces we as humans wear. As you can tell, it's a lot of depth packed into this musical documentary and it gives great insight into Bridgers, encapsulating her maelstrom of a character so damn well.

By the time the record winds down, boygenius kicks in on "Graceland Too" and while it's not the indie rock jam I expected (and which I would have honestly loved more of), the twangy vibe is something that makes me appreciate we're in a year where Brian Fallon and Mike Kinsella's Owen also put out music. When the closer "I Know the End" finishes up as well, it's timely given the COVID-19 times we're swamped with. It builds to an explosion as Bridgers goes on about the apocalypse we all fear, ending with her snarling and hissing to remind us, we may punish ourselves from time to time, but we still do need to fight for what we know, love and believe in. It's an epic way to unpack the album and honestly, another missive from an artist that really should have a much more massive spotlight.