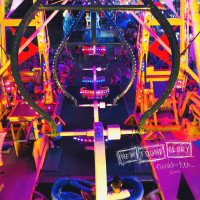 The title of the record may suggest a swan song of sorts or even some kind of farewell from the pop-punk vets, but in actuality, it’s quite literal. New Found Glory isn't going anywhere. The aging wonders who helped pioneer a seemingly ageless sound will forever be around writing gushy and juvenile love songs scattered over themeless albums. On Forever And Ever x Infinity, their tenth studio album, they continue to bolster up their never-ending discography with another forgettable release as a whole, packed together with a handful of punchy, kinda-fast jams.

The first single, “Greatest of All Time,” is the closest they’ve been to the cLaSsIc NfG sTyLe in years, and so aptly titled in relation to the record’s name, it’s mind-boggling that it wasn’t chosen as the opener - especially for a band who historically tend to kick-off with a banger. It’s instantaneously catchy and exemplifies their golden formula of speedy, melodic verses complemented by a mid-tempo hook. It’s the hook, though, that presents the biggest and most noticeable flaw with the head-scratching “Better than the '96 Bulls ever were / Jordan, Rodman, and Pippen / Wouldn't have known what had hit them” line. We all get the comparison, but the trite and reaching feel of it completely waters down the intensity of the otherwise amped-up track.

It’s a good segue for summarizing most of the record - more than a few standouts, most of which are tainted by some questionable and eye-rolling lyrics. “Same Side Sitters” immediately grabbed me, triggering hip-strums and table-drumming, and through the first forty-five seconds, I had thought it was the best song New Found Glory had written in years. Once the chorus dropped, that invisible pick and tapping pen suddenly went dull as I heard, “So let's sit on the same side / When we're out at your favorite restaurant / And we won't care if the waiter thinks that we look cringey.” I know, I know, “It’s New Found Glory, what’d you expect, Bob Dylan?” but something like “You're the catch / And I'm the one you throw back in” (“Double Chin for the Win,”) coming from a bunch of late Gen-Xers who built a twenty-plus year career on kitschy, relationship-driven songwriting, even seems immature and awkward.

Among the misses, there are some hits, (get it?) that’ll surely be setlist mainstays for years to come. On their “GrandPop-Punk’s Not Dead [Yet] Tour,” you’ll still hear the simple and shoutable “Nothing to Say,” and the fiery, straight power-pop-punk “Trophy.” “Stay Awhile” finds its way out of a time capsule dated 2004, flush with a pre-easycore bridge transitioned out with an acoustic-led wrap-up.

Forever And Ever x Infinity didn’t pan out to be the roll-down-your-windows, summery soundtrack that some had hoped, but just like every release prior, and every one to follow, you’ll find tracks that’ll become part of your summer playlists. It’s just one more New Found Glory record that won’t be remembered in totality, but simply as a mechanism to squeeze out a few more memorable, soon-to-be crowd favorites that’ll squeeze into their always energetic and relentless live shows.