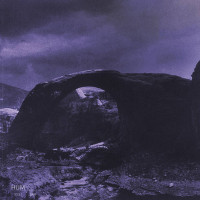 It's safe to say Hum shocked the shit out of the music world by randomly dropping Inlet this week. Their first album since 1998, the band reunited over the last couple years, did reunion shows and teased new recordings via social media. Still, this record hit like a tidal wave and after a few spins on just the first day, it's just as much a typhoon, tidal wave, storm and every force of nature I could describe. Simply put, it's a heavy wall of sound and one of their most remarkable efforts ever. In fact, after a few weeks or months with this, I honestly can see people saying it's their best yet.

Hum's always had an intriguing dynamic to them -- metal without being heavy, is how I'd describe them. Loud without being too noisy as well. I got into them in high-school around '97 but really didn't make much of the band as I wasn't an avid music listener, which made it hurt a bit more when I started writing and really soaking in the art form. By then, Hum was a thing of the past and nostalgia could only be had by backtracking the discography of a band considered dead, or YouTubing videos like the raucous "Stars" or the twinkly "Apollo" -- my favourite tracks of theirs as it's the best representation of their duality. Which is why I adore how this new effort picks up right where Downward is Heavenward and You'd Prefer an Astronaut left off.

From the onset, you've got the thick, dense and drone-y sound of "Waves" reminding you aout how aggressively beautiful Hum can be. Instantly, you're transported to acts like My Bloody Valentine (especially with how Matt Talbot comes off on the mic, as usual), Floor, Torche, Anakin, Helmet and the ilk. Then you've got the old-school flavour of bands like Soundgarden and Smashing Pumpkins: '90s contemporaries that got their due when Hum didn't. You just have to look at tracks like "In the Den" and "The Summoning" as well to see why they influenced Chino Moreno and the Deftones' change in style. The first few songs really do make you wonder why Hum was left off the train and how deserving they really are.

That said, three decades later and honestly, Hum hasn't missed a step, giving light to why bands like Quicksand and Slowdive resonate with their loud/soft dynamic. "Desert Rambler" is a prime example of this and you can't help but admire how they've managed to recapture that ethereal magic and floating melodies while still being abrasive so as to not alienate fans who like Hum as dirty as possible. I love how it's shoegaze, space-rock, emo, post-metal and just a ton cramped in and finessed to deliver audio gold, so that no matter your taste, there's something for everyone.

What deserves a lot of recognition for me too is the pop sensibility packed in, with "Step Into You" finding Talbot, not just focusing on amazing lyrics in a powerful narrative about escaping the cosmos for something hopeful, but casually easing into a catchy, accessible beat. It's an ear-wormer for sure and proves Hum could be underground and mainstream at the same time. The same goes for "Cloud City", which has that feel of The Cure meets Deftones/Quicksand, and once more it's all about switching gears from timid to explosive. It's the band swirling around in a cathartic tundra as if to say the boys aren't back; they were just dormant and in fact, they never really left.

Useless ID: Get In The Pita Bread Pit [Reissue]