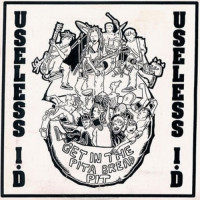 Useless ID were formed in 1994 and hail from Haifa, Israel. Those already familiar with the band know they are heavily influenced by much of what was being released in the States during the Warped Tour heyday. now, the band has reissued their 1999 album Get In The Pita Bread Pit on vinyl via Ratgirl Records. (The album was originally released by the band’s own imprint, Falafel Records). Current fans will be happy to see this released beyond the CD format. Any fan of the classic 90’s “EpiFat” sound should definitely read on.

The heavy guitar-driven “Questions and Answers” kick off this solid collection of early tracks. A solid bassline is present to help lay the foundation for tight rhythm throughout the album. The 90’s Fat Wreck Chords sound is strong on “Perfect Life #2” that boasts a technical song structure. The verses are very fast and quick which leads to a tight groove. “Leaving Town” is one of the standout tracks on Get In The Pita Bread Pit. This song kicks off in a very NOFX-like fashion with vocals over the rhythm track. It should be noted here that rhythm guitarist Guy Carmel handles all lead vocals on this release. The guitars kick in to add to the aggressiveness and catchiness. One observation on the vocals is the ability for the tone to remain constant even during rapid tempo changes. This is very reminiscent of various Bad Religion tracks throughout the years. “Lost Once” is one of the more emotional tracks on the record, that showcases again the heavy American influence on Useless ID. The 90’s skate punk sound is present again on “Time To Move On.” There are many quick breaks and tempo changes throughout this track which will take you back to the parking lot at Warped Tour. “Lost In Space” is a powerful track lyrically about lost friends and trying to find clarity. The next track “Run” could have been an alternative radio single back in the day. The California skate punk sound makes it way back on “Have A Nice Life” that precedes the final track. The alt rock sound returns on “Not Too Late” which closes out the album. Early Blink 182 vibes are strong. As an added bonus, this reissue also includes their take on the Beatles classic “Here Comes The Sun,” entitled “Here Comes The Scum.”

This review was written more for those not familiar with Useless ID. Long time fans most likely are more familiar already with this release. This Israeli band has had an illustrious career since first forming in 1994. They have toured all over the world and recorded for labels such as Kung Fu Records and Fat Wreck Chords. Vinyl collectors will be happy to finally be able to spin this on their turn table. Hopefully this reissue will reintroduce this band and early release to a new crop of fans.

Lion's Law: The Pain, The Blood and The Sword