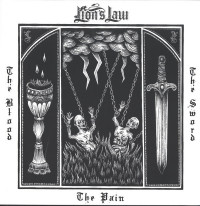 I’m continuing in my quest to give some non-English speaking bands a fair chance. (I’m a big lyrics guy, so it can be difficult.) This time, I turned my attention to France’s Lion’s Law. They’ve been around since 2012, and The Pain, The Blood and The Sword is their 4th LP. They’ve also amassed a decent pile of splits, singles and EPs. Although I was totally unfamiliar with the Paris quintet, it didn’t take long for them to win me over. It certainly helped that the majority of the songs actually turned out to be in English.

I was drawn to the clean black and white album artwork before I even heard a note. It’s got a cool medieval looking chalice and sword, and what I believe are a couple of damned souls burning in hell. (For those who slept through word history, the Protestant Reformation skipped France, possibly helping to explain the gothic Catholic imagery.) It’s definitely not the cover of grandma’s hymnal.

I was actually a little surprised how melodic Lion’s Law are. It starts right off with the epic instrumental opening track, “Intro”, continues into the de facto title track, and keeps on going throughout most of the record. It makes for a nice contrast with the gruff lead vocals. Sonically, and maybe spiritually, it’s like the bastard son of Cock Sparrer and The Templars. There’s still plenty of the street-punk and oi that they’re known for, but they’re also not afraid to experiment and incorporate other punk elements.

All the songs are well written, but some stand out more than others. On the first side, “PBS” is a ripper that sets the stage for what’s to come. “The Reaper” is like a slightly more aggressive Motörhead, complete with raspy, Lemmy-esqe vocals. “Escape” is probably the catchiest song on the first half, if not the whole record. “Roses and Fire” has an almost Agnostic Front type hardcore vibe. Overall, there are lots of hooky choruses and lead guitar lines.

The second side is as good as, if not better than the first. “The Enemy” and “Revenge” are fast, heavy killers. “Damaged Heart” is a total earworm, and the other candidate for catchiest song on The Pain, The Blood and The Sword. “Pathfinder” and “Destined to Fall” are a great one-two punch to bring things to a satisfying conclusion. Songs like these are what is going to make this record a strong contender for Album of the Year among the traditional punk crowd.

It’s funny - I obviously love a ton of UK bands, quite a few Dutch bands and even a couple of German bands, but I don’t believe I’ve ever enjoyed a French band. Maybe Lion’s Law is the band that can finally kick down the door to that country for me. If there’s more stuff of this quality, I’d gladly listen to it. Even if it happens to be in a foriegn tongue. (Although it helps if it’s not!)

Interestingly, The Pain, The Blood and The Sword was co-released between a whopping 10 different record labels. (HFMN, Cargo, UVPR, Contra, The Firm, Comandante, Barroom Heroes, Coretex, LSM and Pirate’s Press.) Several of the labels have their own unique version too. If you’re the obsessive collector type, this might be the release that finally makes your head explode. If you’re just looking for some killer punk, Lion’s Law definitely deliver.

Useless ID: Get In The Pita Bread Pit [Reissue]

Temnein: Tales: Of Humanity and Greed