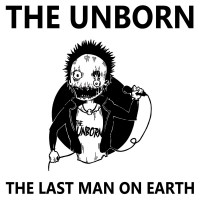 I was previously unfamiliar with this Italian band prior to hearing this cassette EP. This band hails from Viterbo, Italy and plays a blend of street punk mixed with horror. The Unborn formed in 2015 and have appeared previously on a number of compilations. This four song EP is a collection tracks previously appearing in some fashion on other compilations.

“L’Ultimo Uomo Della Terra” is the lead-off title track of this cassette. Per the liner notes, this song is inspired by the 1964 post-apocalyptic film “The Last Man on Earth.” Musically, this is your standard modern street punk anthem type of song. Fans of bands such as the Casualties or the Virus should take note. There are solid and effective dual lead vocals throughout. Next up is the Unborn’s take on the Misfits classic “Braineaters.” What makes this more unique than your average Misfits cover is that the lyrics are fully in Italian. This song originally appeared on the “We Are the F(r)iend Club” compilation. This is an ambitious track to cover being one of the more novelty Misfits track in the catalog. The band seems to have fun with this tribute. Side B of the cassette starts with “Videodrome.” This track has more of a resurrection-era Misfits feel. This horror punk sounding number is the heaviest track on this collection. Per the liner notes, this track tells the tale of the dangers of modern technology. Solid basslines and guitar leads are present throughout. The short instrumental track “Slasher” closes out the EP. This is the demo version of this track which sounds like something out of a cult horror soundtrack.

This short EP is a decent representation on what The Unborn are all about. There are varying styles present throughout the cassette. The street and horror punk are obvious through most of this release. I look forward to a full length release which would aid in hearing this band’s full potential.