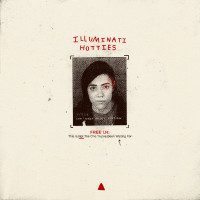 Every now and then, in my adventures in various music scenes, I come across a musician that simply has a prodigious, profound grasp on song craft and composition. They seem to effortlessly understand music as if it were their native tongue. On their latest album, “FREE I.H.: This Is Not The One You’ve Been Waiting For”, Illuminati Hotties mastermind Sarah Tudzin demonstrates she is indeed one of those rare musicians.

2018’s “Kiss Yr Frenemies” was a frantic masterpiece, and frankly, a tough act to follow. On “FREE I.H.”, Tudzin and company seem more than willing to try to top themselves. The album opens with the wonderfully jarring lead single "will i get cancelled if i write a song called, 'if you were a man you’d be so cancelled’”. The songs saunters along with a frantic toe-tapping rhythm that stumbles into a a nearly atonal chorus. It is not a safe song. It is not an easy song. But it works and it demonstrates Tudzin’s deconstructive mastery.

Even though the band has transcended the need to write palatable pop ditties, they still have the capacity to crank them out when they want. “Frequent Letdown” is a perfect example of their pop chops, and echos some of the pitch-perfect emo they toyed with with on “Kiss Yr Frenemies”. A few other tracks, such as the sublime “B Yr Own B”, showcase more of that effortless pop craft.

While I.H. definitely have some stylistic and cultural tethers to the reinvigorated “emo” scene of the past 15 years, their sound is viscus and often indescribable. One of the most interesting of the songs is the delightful “Melatonezone”. The song plays out like Mark Mothersbaugh collaborating with Deer Hoof to make an Afro-Latin pop-punk song… if you can imagine such a thing. But the Hotties do it and they do it well.

While the band fearlessly experiments in unfamiliar territory, there are also some wonderful straight-forward punk songs on here. Even when they stick to the familiar, they still know how to keep it interesting. See “Wattbl” and “Superiority Complex (big Noise)”.

The rest of the album bounces around from emo to kraut-rock to electro-pop to riot grrrl, and even to that 2000’s “indie rock” sound. Despite all the sonic gear shifts and lane changes, the album settles nicely into the perfectly stripped-down emo folk closer, “Reasons 2 Live”.

Being weird isn’t new, and Illuminati Hotties aren’t trying to re-invent the wheel. But they prove on “FREE I.H.” that they’re legitimately weird and fantastically talented. Their fearless approach to pop is as refreshing as it is exciting. In all honesty, each track deserves a tedious, exhausting description and analysis but I will spare you; this is an album that deserves to be heard.