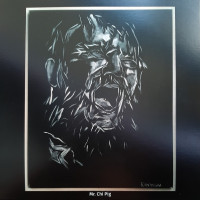 Imperfect, melancholy and morose, Chi Pig decided to tackle Nine Inch Nails “Hurt”, which is no small feat considering Johnny Cash took the song and made it his own a few years back to great applause. It takes some nerve to tackle something that has already been made iconic although what Chi Pig did not lack was nerve.

Backed by a cello, piano, violin, guitar and some light percussion Chi entered the studio and laid down his vulnerable vocal track. Drug addiction, alcohol and age have not been particularly kind to Chi Pig’s voice, but this song highlights the emotion in his voice, the inflection and tone is very reminiscent of his days with SNFU.

Johnny Cash seems to have influenced this cover more so than Trent Reznor’s. This version is more a man lamenting his past regrets and coming to terms with his inevitable impeding death, somewhat of a foreshadowing for Chi Pig himself. In a recent interview he proclaimed that he had a month to live. He was not far off.

The B-side of this release, done through a local comic bookstore, is the SNFU classic and fan favorite “Painful Reminder”. Originally released on the 1993 album “Something Green And Leafy This Way Comes”, his version here is stripped down to it’s core but it’s kept light which is a nice pallet cleanser from the previous A-side. Still, it’s not quite as effective as his cover of “Hurt”.

With the recent passing of Mr. Chi Pig, this is a touching final release (not including the posthumously released “Cement Mixer”) which is meant for friends, family and fans of the late and great Mr. Chi Pig.

The departure of the man known to his family as Ken Chinn has left a gaping hole in not only the local punk rock scene but on a global scale as well. Did he know how important and influential he was? Chances are, if he did, he wouldn’t have given a shit anyway. RIP.

Illuminati Hotties: FREE I​.​H: This Is Not The One You've Been Waiting For

Oolong: About Your Imaginary Friend