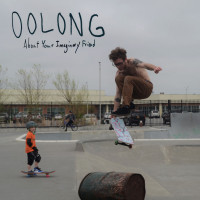 About Your Imaginary Friend (2020)

I’ve been out of the review game for a while now. Life got in the way of my involvement with Punknews, but I’ve tried my best to stay current with the scene. There have been a lot of great releases since my departure and Oolong is definitely making waves in the burgeoning world of DIY twinkle-centric emo acts. In fact, the band was so immediately renowned that they spurred a bit of online controversy, as people claimed they were something of an industry plant. Though I’m not gonna entertain the ridiculous notion that the industry would have any sort of substantial financial interest in Oolong’s scene, they do have a legitimate connection to a pretty established name right off the bat. Drummer, Sam Becht, used to drum in Jank, the formerly beloved (though less so these days, in light of their frontperson’s track record of detestable behavior) “weed pop” pioneers. Needless to say, Oolong is just breaking onto the scene, but it’s not as if they’re coming out of nowhere.

About Your Imaginary Friend came out back in February but it’s stayed in pretty regular rotation for me all year and I can’t think of many other 2020 releases that have. That said, there’s not much that separates Oolong from the pack in terms of style. About Your Imaginary Friend borrows heavily from many of the Cap’N Jazz worship acts that kicked off the emo revival a decade or so ago. Admittedly, Oolong doesn’t have much to offer that you couldn’t get from an Algernon Cadwallader or a Street Smart Cyclist song. It’s an established sound, but Oolong knocks it out of the park. Had this record come out during the genesis of fourth-wave emo, I have no doubt that it would be regarded as a classic of the era.

About Your Imaginary Friend encapsulated me from the get-go with tracks one through three. The opening title track is an acoustically driven ballad with some beautiful glockenspiel embellishments. It’s brief -- just under two minutes -- but it does a great job of setting the scene and building up towards the end into the immediate burst of energy that kicks off “Welcome to Destiny Island”. “Welcome to Destiny Island” serves as a contrasting companion piece to “About Your Imaginary Friend”’s composure and serenity, as it drifts from between loose waltzes and vigorous performances that feel one blow from falling apart at any given second. Track three, “Roxies and Cigarettes,” carries that energy over with its catchy as all hell opening guitar line and an accompanying drum part that perfectly compliments its jagged simplicity. The rest of the song is a rollercoaster with countless twists and turns into new grooves and tapestries of sound.

This opening trifecta of tracks demonstrates an attention to sequencing that keeps full album listen-throughs engaging. Regular fluctuations in energy throughout About Your Imaginary Friend’s runtime stop it from turning into your standard riff-salad slog. For example, there’s the lively acoustic romp, “Mount St. Mary,” or “My Afternoon’s Shotgunned” which starts with what could ostensively be a hardcore song and ends with a smooth jam session of interweaving guitars. It also helps that the band has a knack for refining their material and filtering out any weak, unmemorable riffing. All the leads feel more deliberate than the open-tuning tapfests that have come to dominate the genre (although there is the occasional background wankery during a verse here or there for flavor). My personal favorite track, “Dude, It’s Painfully Obvious,” starts somewhat unassumingly and I honestly wouldn’t blame anyone for writing it off as filler at first. The track shows more depth, however, as it progresses, integrating some great sweep picking sequences, an erratic stop-and-go structure, and a big triumphant outro to cap it all off. It’s that kind of unpredictability that keeps me coming back for more time after time.

This is a fantastic debut from a band that seems destined to do some interesting things on subsequent releases, but I also completely understand anyone who sees it as derivative. If Snowing and Glocca Morra were never your thing, About Your Imaginary Friend probably won’t sway you. However, if you’re looking for something that does that era justice, give this debut a shot.