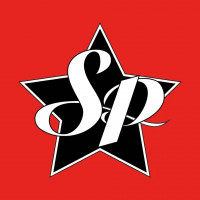 The story of the Stinking Polecats dates to 1997 in Piacenza, Italy. This Ramonescore band eventually broke up in 2005, but not before releasing countless albums and singles. The band played many shows throughout their career in Europe before calling it a day. You might know bassist Chris and guitarist Luca from their later formed band TOUGH who have been making waves in the scene as well. Last year saw the Polecats making an impromptu reunion of sorts with a performance at the annual Punk Rock Raduno Festival in Italy. This was the springboard for this new three song 7-inch release which marks the band’s first recorded effort in 15 years.

“What Do You Do” leads off this short but sweet pop punk gem. There are strong greaser punk vibes on this one. Chris Polecat delivers in a nasally tone previously heard from Social Distortion’s Mike Ness. This track boasts both a mid-tempo upbeat pace and a catchy chorus. This song packs quite punch in 2 minutes and 13 seconds! “Monday” is a classic 90s sounding pop punk track which would have fit well on Lookout Record. The Polecats present a sing-a-long love song that features Jughead influenced guitar leads. Muted verses into a big chorus makes for the standout track for me on this release. The more post punk sounding “Perspective” closes out this EP. The Polecats showcase their musical diversity beyond pop punk by channeling the early Stiff Little Fingers sound. The spirit of ’77 is strong on this track featuring more catchy guitar hooks and melodies.

This EP celebrating the reunion of the Stinking Polecats is worth a listen. Though a pop punk band, there is enough diversity in this short 7-inch to appeal to all punks. This release is for anyone who likes big hooks, tasty guitar leads and a catchy chorus. Let’s hope this EP is the precursor to more recorded output from these Italian legends.

Oolong: About Your Imaginary Friend