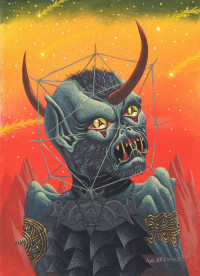 My organic path towards the more esoteric and unusual end of the extreme metal spectrum in the last few years has opened my eyes and ears to some records that I have to accept simply would not have been tolerable to me in my younger years. Sometimes records exist in that category for reasons that have little to do with sonic heaviness; and this record by enigmatic French musician Asthagul (under the name Esoctrilihum) is a record that falls firmly into that camp. This is the 5th full length from the project since 2017(!) and the first that I’ve heard, in the interest of transparency. There is undeniably a stigma attached to one-person black or death metal projects. The myriad memes on the topic suggest they’ll all be self-indulgent, directionless and ultimately lacking in real quality. Not the case here.

To be completely clear, this is not your usual death or black metal. It has elements of both, but I suppose it could be described as a sort of post-death metal world music record. But bear with me. There are extended passages of tender and sombre piano, various traditional stringed instruments that I won’t even attempt to identify, gongs, chimes and percussive instruments that are borderline hypnotic, spoken word samples taken from films/television and in fact, organs form the bedrock of a number of the album’s 10 tracks. Sometimes those organs are twinned with the Eastern-tinged stringed instruments to conjure a nightmarish circus or Vaudevillian merry-go-round ambience which is unlike just about anything I’ve ever heard in a record. When you add to that some of the most truly demonic vocals I’ve ever heard (there are moments when you could be forgiven for thinking you were listening to an exorcism taking place), then it makes for a sincerely unsettling listen at points. What makes the album so intriguing however, is that in spite of what I’ve just said, it’s not a hard record to stick with. I often bemoan records for outstaying their welcome and with this record clocking in at just over an hour, it should be a prime candidate for that…yet somehow, I reach the end every time I listen without the slightest sense of lethargy or waning engagement. It’s quite something.

At the risk of outing myself as being inadequate at my job, I don’t know if it is within my abilities to articulate the experience of listening to this record in a way that I think is truly representative. It is at once shamanic, moving, frightening, orchestral, impressive, baffling and cinematic. Perversely, I’ve barely mentioned the more conventional extreme metal components, but they’re present and correct. Blast beats and distorted guitars are used liberally and diversely but are rather bullied into the background for significant stretches of the record by the mind-bogglingly lush and complex arrangements that sit around it. If one measure of an artist is their commitment to identity or experimentation, then Esoctrilihum gets full marks. If another is their ability to bring you into their world, then I can’t say enough about this album. If you’re willing to let this record sweep you up in its journey (there is also a bizarre narrative apparently, though I can’t pretend I’ve followed it), then the rewards are enormous, and there for the taking. Maybe more so than (almost) any other record I’ve heard this year. I’ve been listening to this for the last couple of months and it’s taken me this long just to feel like I have the beginnings of a grip on the record. I look forward to strengthening that grip and unpacking more of the secrets Eternity of Shaog has to share in the years to come.

The Replacements: Live in Chicago