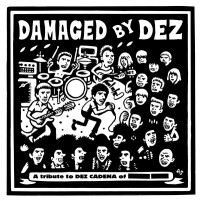 What we have here is not your average tribute release. Per the liner notes on back of the sleeve, the purpose of this 7” is to pay tribute to songs that former Black Flag frontman Dez Cadena had either written, recorded or played live prior to them later appearing on the “Damaged” LP. This six song EP gathers a mix of bands from mostly the Midwest and East Coast, apart from Vieja Estirpe who hail from Puerto Rico. Various punk and hardcore subgenres are represented throughout the release.

Maniacal Device from Pennsylvania kick off the release with their aggressive take on “Six Pack.” For those not familiar, this band leans on the heavier cross-over side of hardcore. Fans of bands such as DRI and Poison Idea should take note. The band mostly pays direct tribute to this early Black Flag classic. Solid rhythms are present throughout as well as interesting guitar leads. Singer and songwriter Jesse Blankenship performs a stripped down version of “Jealous Again” which is a unique contrast from the intro track on this release. It is always interesting to hear an artist outside of the genre’s take on a punk rock song. The A side of this tribute concludes with the crossover fury of Puerto Rico’s Vieja Estirpe. I recently became aware of this long running band who drink from the same water musically as Maniacal Device. Their take on “Rise Above” includes solid and effective backing vocals which adds to the track’s catchiness.

Betty Machete and the Cougars from Ohio kick off Side B. This band plays what I would describe as snotty punk n roll. Their take on “American Waste” has hints of Motorhead and the Dead Boys. Mummula, who describe as hailing from “Sandsylvania,” are a garage / surf punk band. I found their version of “Gimmie Gimmie Gimmie” to be one of the most interesting tracks on this tribute. Surf guitar leads are present throughout. Hints of 90’s garage punk bands such as the Rip Offs and Groovie Ghoulies are heard on this track. Hardcore heavyweights Pure Heel from New York close out this tribute. Their version of “Damaged I” is fairly like the original. This is a solid effort though not my favorite Black Flag. This song foreshadowed the future sound of Black Flag with Henry Rollins on vocals.

I applaud the efforts of the label for putting together a unique take on a tribute release. The focus on Dez Cadena separates the EP from other Black Flag tributes. This release is a good introduction to some newer bands influenced by 80’s American hardcore. Aside from the music, just like most Black Flag releases, this one features some cool artwork on the sleeve.

The Replacements: Live in Chicago