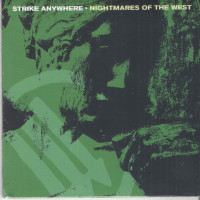 So there's this obscure band called Strike Anywhere and I heard they're not too shabby. And whaddaya know.... it's true!

My asinine attempts at humour aside, I always enjoy a good Strike Anywhere debate, mostly because it's never really about the band's quality, but which of their amazing discography stands out most. Exit English is the gold standard for me -- hey, I'm a sucker for "Infrared" -- but I must say Iron Front also has a very personal space in my heart. It still shocks me that it came out in 2009, but 11 years later, S.A. haven't skipped a beat and given the current global climate, they've got all the right fodder and creative inspiration to remind us while the world may seem fucked, the onus is on us to fight back.

I admit singer Thomas Barnett's side-project with Great Collapse was enough to tide me over, but the more you see acts like Rage against the Machine, ATDI (well, sort of) and RTJ bubbling in what will definitely be a new (yet familiar) era of political music, you just can't have S.A. absent from the mix. And what I love about Nightmares of the West is that it's so real and self-explanatory, it helps you to take a break from the news and doomscrolling, and remember to keep the fire burning.

Now, off the cuff it's all about that pop punk sensibility via melodic, catchy bangers with "Documentary" giving you a snapshot of the world, and honestly feeling like vintage S.A. Barnett's in his prime. I appreciate that while the EP is less aggressive and less skate, it's still fully angry and timed for the present in terms of pandemic, social justice protests and shit governance across the world. And the direction the band adopts, going for more singalong, shout-along, gang-styled tunes just fits for a time when we need a familiar comfort, but something that resonates more in the name of liberty and togetherness. Songs like "Dress the Wounds" and "The Bells" have that unity to them and I can see big things when/if live shows resume as they're built on camaraderie, again... a staple of the band.

And to that note, this record is certainly going to appease fans of Anti-Flag and Rise Against I'd say, and you can even pick up on Set Your Goals, another act Barnett has affiliations with through Great Collapse. It's worth nothing that while you'd think the band would go full-blown noise and speed, I think tempering the sound down really makes the messages last a bit more, especially as they're much more digestible for people who really might not want to feel as angsty or angry these days consuming media and art.

After all, rage is out in the streets at all corners, and in the air we breathe, so S.A. does cultivate a respite of sorts. It's visceral the way Barnett wades into our history of oppression as well in just seven songs, but there's another cut of catharsis on "Opener," a Blocko cover after one of the Barnett's close friends, Marc Maitland, died. It's what helped inspire S.A. to keep the engine roaring and with the flagship "Imperium of Waste," you can't help but feel that they'll be pumping out stuff for a while to come. Even on the more exploring closer "We Make The Road By Walking," it feels like a precursor of what's to come and one can only hope this is just the beginning. You can tell Barnett is holding back in his arsenal some fucking bombs and I personally can't wait for them to drop.