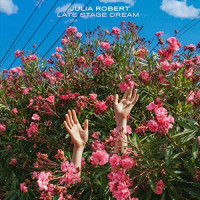 Not even a year ago, Cape Town’s Julia Robert released their triumphant debut album, “Pop Bullies”. “Pop Bullies” seemed to capture all of the best elements of the band’s previous efforts and condense them into 30 minutes of melodic bliss. The success of “Pop Bullies”, however, posed a difficult question; how would the band follow it up? Luckily for everyone involved, the follow-up EP, “Late Stage Dream”, builds upon what the band built with “Pop Bullies” and ventures into a more cohesive sound with even stronger songwriting.

While Julia Robert has always danced in between art-punk, new wave, and emo, “Late Stage Dream” as a whole, hits a little harder and heavier than usual. This is laid out in the boisterous opening track, “Sick Day”. The song rips to life with a driving, chugging pulse before exploding into an insanely catchy chorus, singing the virtues of ditching work. As usual, front woman Ines Soutschka’s vocals wrap the whole thing up in a wild little package.

The middle of the EP keeps the heavy edge going with two rippers, “You Talk With Control” and “Rollergirl”. Between Soutschka’s sultry howl and the peppering of synth lines, you’ll get nostalgic vibes from the early-2000’s underground. A few bands immediately come to mind: Pretty Girls Make Graves, Rainer Maria, and Yeah Yeah Yeahs. Not a bad crowd to be associated with.

The band dials back the heaviness for the closing track, “Starkes Mädchen”. The German-language song is a nod both to Soutschka’s Namibian childhood and to the band’s New Wave influences. The bass groove dances with the synths in a way that only the greats like New Order or The Cure could manage.

In such a strange time, where live music has all but ceased and many bands have slid into involuntary hiatus, new music is always welcome. But even in a “normal” year, the strength of “Late Stage Dream” would be noteworthy.

Paper Towels: Year of the Dog