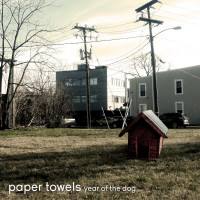 The EP I’m reviewing today is a year and a half old and I wrote this review shortly after its release but I became inactive on the site around that time. I figured I’d never put this out for lack of relevance, but in light of some extremely strong singles that have been released lately, teasing at a full-length debut in late October, I figured it would be worth it to revive this piece and bring some attention to a criminally overlooked local act.

Paper Towels is the solo project of Brendyn Wirtz, who was best known as the frontman of the now inactive skate punk act, Bad Jokes (which, side note, is also worthy of your attention if you’re a fan of that fast hooky brand of skate punk popular in the late 90s and early 2000s). While Brendyn’s history with punk certainly shines through in his solo material, he’s made efforts to distance himself from the classification, favoring the youthfulness and relevance of modern trap. Paper Towels is certainly not trap, but infatuation with the trap scene has molded its sound. Earlier Paper Towels output didn’t do much to convey said influences, apart from the general concept of using midi instrumentation. While debut release, The Absorbent EP, presented some solid melodic ideas, its presentation tended towards the uneventful. Year of the Dog more accurately finds its niche in a sound that would be simply labeled as experimental, if not for its pop hooks and song structures. Though this release delivers a sound unlike anything else I’ve ever heard, the main appeal of Paper Towels lies in the project’s emphasis on ear-catching choruses.

There are exceptions to this. For example, the song “Born to Die in California” is based around the interplay between dirty industrial dissonance and bubblegum vocal harmonies. It keeps things interesting by employing constant tonal shifts and fluctuating levels of aggression. On the other side of the spectrum, there’s “Fear of $ucce$$,” which is much more straight forward from a conceptual standpoint (up to the glitchy payoff right before the final refrain) and stands out with strong melodic hooks and lyrics.

Barring the instrumental introduction, Year of the Dog is only five songs, but each feels just as necessary as the last, contributing something new to the fold. These tracks play off each other to create a cohesive 16 minutes, greater than the sum of its parts. As a result, I rarely return to individual singles from the EP, opting instead for the heightened experience of the full thing.