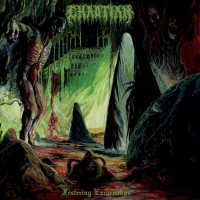 I won’t lie to you, I may have an ulterior motive in reviewing this record. It might not be because it’s unique, boundary-pushing or even necessarily objectively excellent. What it is however, is the best example of producing a death metal record in a fashion that sounds authentically live that I’ve heard in a long time. Certainly since long before the (most) recent round of events that have driven the world further and further along the corpse-strewn road of turning to complete shit.
And therein lies the beauty of this record. It’s 6 songs, less than 35 minutes and each time I’ve listened to it (which is quite a lot), I feel like an itch has been well and truly scratched. Obviously listening to a record cannot be a long-term substitute for the live music environment (the beer is too cheap at my house and the toilets smell marginally less disgusting), but the reckless abandon that this record attacks you with feels so visceral, so tangible, that for its duration, you could almost imagine you were there. It’s a doom-tinged approach to death metal that Chaotian favour, which is a subset of a sub-genre that has produced some very strong work in the last year or so (Nekrovault, Ulthar, Cauldron Black Ram, to name a few) and if you listen to those records alongside Festering Excarnation, then it’s even more apparent how committed Chaotian have been to the production style. Listen to the guitar and bass topping out slightly in the first real moments of heaviness on "Where Gods Excarnate", the tightness of the riffing and rhythm work that still slips marginally in and out of sync in "Chaos Kampf". There’s no other way of saying it; it just feels like watching a live death metal band. A good one.


This review might, in truth, be half a lament for how acutely I’m missing live music, but it takes a certain sort of band to be able to capture that feeling in a recorded medium so successfully. This is the first thing that Chaotian have released on Spotify (they have a demo and an EP on Bandcamp) and at the time of writing have 226 monthly listeners on Spotify. Based on this release, that is far from being enough. Whether they’ve chanced upon this grizzled, effervescent combination of production qualities is mercifully not the be all and end all anyway, as their songs are vastly more accomplished than their modest listener numbers might have you expect; riffs and breaks that have a sense of anticipation and occasion to them (more so than may other death metal bands), vocals which are grim, guttural and more varied than many of their counterparts, and from that production, an urgency and vitality which just will not be suppressed. The band are a 3-piece as well, it’s worth pointing out. Less a classic power trio though, and more a malevolent band of ragtag metallic troubadours whose music is so gloriously grimey that it feels like it should come with a free tetanus shot.

Look. It’s good. At points its very good indeed. However, my appreciation for this record is almost certainly heightened by virtue of the absence of live music in (most of) the world today. That said, even if live music were happening now, then that should not detract from the value of a record being able to evoke this feeling in a listener. My penchant for transportative music is something I’ve come to accept and acknowledge over the years, but more often that’s the case when a record transports me to a time and place that is somehow fantastical. Otherworldly. Horrific. What happens with Chaotian is they transport me to The Black Heart in Camden, or the Boston Music Rooms in Tufnell Park. A dark, booze and sweat-stained room full of inwardly jubilant, battle-jacketed metalheads doing what they love. I also suspect that Chaotian are a band made up of those same sorts of people. And in Festering Excarnation they’ve created something of a gift for us of that persuasion. It might be loose, at times unsophisticated and ultimately unpolished, but those are among the primary reasons I will continue to listen to this record.

Paper Towels: Year of the Dog