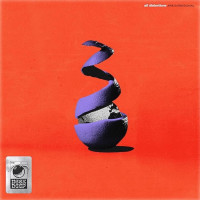 Only a handful of big pop-punk bands still live in their primes. While the sub-genre’s giants continue to produce quality music, their glory days left with their youth, even if their sound is forever young. Still glowing from the success of their 2017 album The Peace And the Panic, Neck Deep rides high in a pop-punk landscape shifting away from heavy power chords towards whatever Yungblud is doing.

Their 2015 album Life’s Not Out To Get You highlighted pop-punk’s mini revival and their work since has complemented it nicely. Their newest All Distortions Are Intentional fails to break new ground, but is a stellar addition to the band’s discography with plenty of smashing tunes for fans to add to their summer playlists.

The thumbing “Sonderland” kicks off the album before giving way to the catchy “Fall.” The former is the perfect tone setter and a lyrical success, while the latter highlighted a list of mostly bland singles. “Fall” builds from a chilled-out first verse to perfectly abrasive finish worthy of repeats.

“Telling Stories” is the clear, standout track and the first song new listeners should stream. Its atmospheric opener gives way to a bouncy first verse leading into an aggressive, throwback Neck Deep chorus. The tune rarely loses tempo, reminiscent of the band’s biggest hits from their breakout Life’s Not Out To Get You. But it comes with the polished sound you’d expect from more experienced musicians. “Telling Stories” is the best of everything Neck Deep has done rolled into snappy track worthy of being the band’s next single.

Other reviews knock “All Distortions Are Intentional” for lacking creativity. That doesn’t seem fair as the band boldly lines up three soulful slow-ish jams in the middle of the album. It’s move that could lose low-focus pop-punk fans addicted to double kicks and power chords, but “What Took You So Long,” ‘Empty House” and “Little Dove” all connect. They are some of Neck Deep’s best change-of-pace tunes. “What Took You So Long” stands out as the most lyrically sound, giving vocalist Ben Barlow room to run wild.

The album closes with “I Revolve (Around You),” the best of the early singles, and the heavier “Pushing Daisies.” The final track is the album’s most timely, targeting the abrasive culture that lives in online chatrooms and comment threads. The line “Remember we all end up pushing daisies/ You gotta let it go” puts it clearly; who cares what a stranger in the comments of an album review think? We are all going to day soon anyways.

The album is not without slip ups. “When You Know” feels like a The Peace And The Panic b-side while “Quarry” is a half-hearted attempt at emo rap (actually might have been good had it been longer). “Lowlife” was supposed to be the album’s hit, but turned into an overproduced flub.

Look, All Distortions Are Intentional isn’t a game changer. But it’s better than Neck Deep’s 2017 album and a solid addition to the band’s growing legacy. If you like contemporary pop-punk, this album is for you.

The Slackers: Nobody's Listening/Sleep Outside [single]