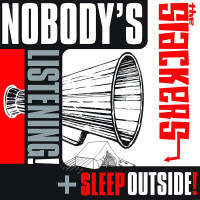 On The Slackers new single, “Nobody’s Listening” and “Sleep Outside” are both pressed on one side of this 45 RPM 12-inch record, and the other side is laser printed. While it’s not a picture disc in the traditional sense, the album artwork is printed directly on the B-side. It essentially gives you the same effect, without the potential sound quality issues.

None of the superficial stuff would matter if The Slackers didn’t back it up with the songs, which they did. The tracks were recorded live at Ernesto’s in the Netherlands. It doesn’t mention the year, but they don’t appear to be from the same show that became the 2000 Hellcat Records double LP Live at Ernesto’s. However, this was released in conjunction with the Pirate’s Press Reissue of Live at Ernesto’s.

“Nobody’s Listening” combines less than optimistic words with upbeat ska music. It’s got plenty of horns and a saxophone solo to offset the lyrical frustration, and it’s all packed into about a minute and a half. “Sleep Outside” is a two and a half minute organ driven song about not being able to pay your rent and becoming homeless. The song’s origins go all the way back to the band’s 1992 cassette Do The Ska With The Slackers, but sadly, its message feels extremely timely in 2020.

The Slackers are in the midst of a career upswing. Between the ongoing reissues of their classic albums and the current Third Wave of Ska revival, Vic Ruggiero and company are striking while the iron is hot. “Nobody’s Listening” and ”Sleep Outside” give fans a couple fresh, fun songs, and a much cooler collectible than a standard 7-inch.

Neck Deep: All Distorations Are Intentional